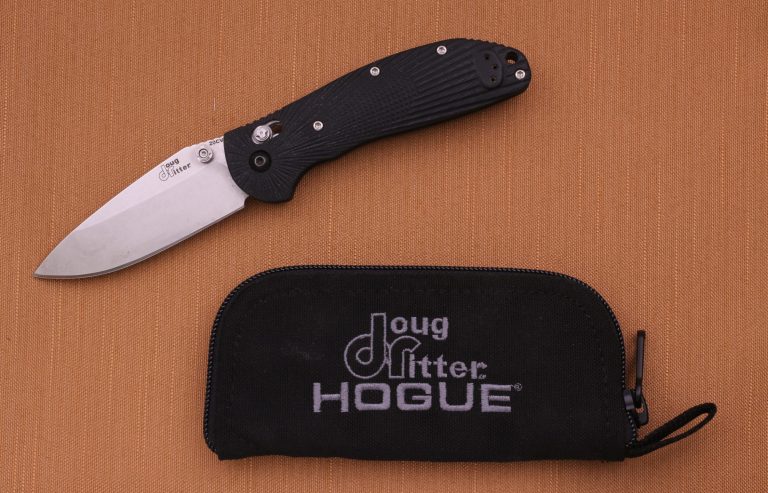 Since its introduction in 2004, the Doug Ritter “Ritter Survival Knife MK1” developed a devoted following. This is best illustrated by the fact that when Benchmade ceased production of it and Ritter’s other models in 2016, the price for even used examples in the secondary market climbed passed the original MSRP. Demand remained strong for this robust, ambidextrous folding knife.

It was important that Doug find a new home for his designs, as the royalty income provided allowed Doug to devote the majority of his energies to his position as Chairman of Knife Rights – an organization which he founded and remains the most visible and effective champion of protecting and expanding the legal access and use of knives in America.

It didn’t take long for him to find a partner in Hogue Knives, and the new RSK Mk1 Gen 2 was born.

Ritter said, “in Hogue I believe I have found a partner who understands my goals, is dedicated to producing world-class knives in the U.S. with customer service second to none. They are also committed to helping Knife Rights continue to forge a Sharper Future for all Americans.”

Jim Bruhns, Hogue Managing Partner, said, “We couldn’t be prouder to partner with Doug to manufacture his highly regarded knives. That this will allow Doug to continue to fight for our rights is just icing on the cake for all of us at Hogue who one hundred percent support Knife Rights.”

Under the hood, the RSK Mk1-G2 looks much like its predecessor. The centerpiece of the knife is an improved version of Benchmade’s AXIS® Lock, whose patent expired in 2016. They are calling this new lock design the ABLE™ Lock—standing for “Ambidextrous Bar Lock Enhanced.” This next generation bar-lock includes a tougher lock bar, additional screws and an offset design which increase strength, while improved lock geometry, finish, and premium W.C. Wolff Co. springs (the same used in Hogue’s automatic knives) ensure smooth and reliable operation. 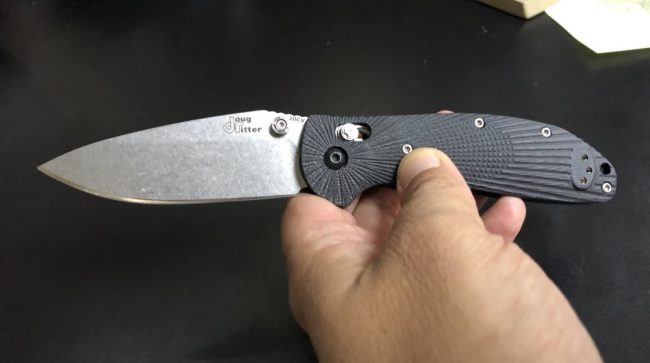 The 3.4” drop point blade with its signature high-flat grind is largely unchanged from the first generation RSK Mk1. It rides on phosphor-bronze washers. While the initial run of Hogue’s RSK Mk1-G2 featured the same Bohler M390 steel of the Benchmade, it has subsequently been switched to CPM 20CV, an American steel with similar characteristics to the Austrian Bohler steel. The blade has a tumbled finish, and the dual thumb studs are another example of the fully ambidextrous design of the knife. 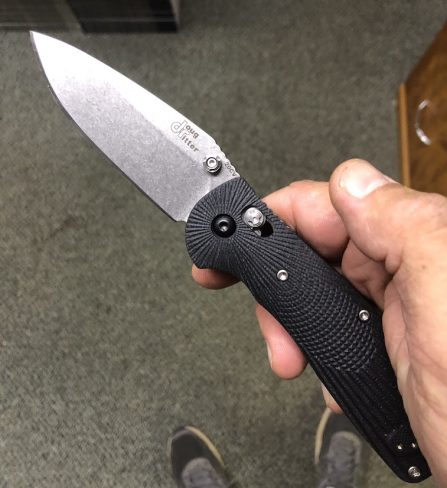 The handle scales are CNC-machined G10 with a radiating sunburst pattern, aggressive yet comfortable texture and unique aesthetic. There is an increased ergonomic swell from the first generation model, filling the hand more completely. Instead of a solid back, the RSK Mk1-G2 is an open design with a series of standoffs providing easier cleaning access to the interior of the handle. Redesigned jimping throughout the handle, thumb ramp and blade round out the package, which weighs in at 4.5 ounces. 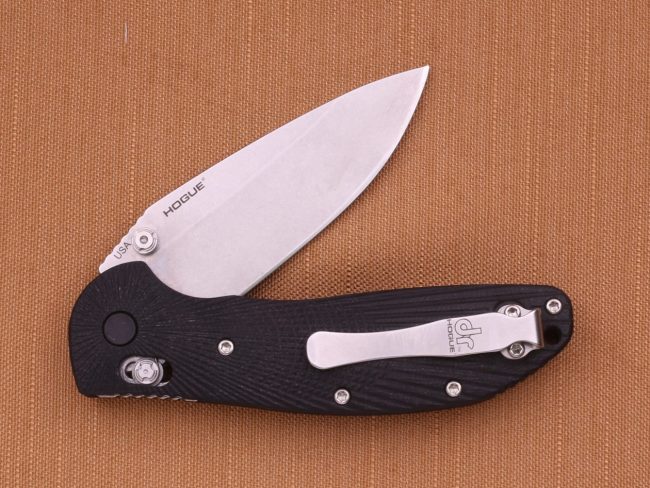 The included deep carry clip is secured with a pair of screws, though the knife is tapped with 3 brass-lined holes to accommodate a variety of aftermarket clips as well. It is reversible for ambidextrous, tip-up carry. 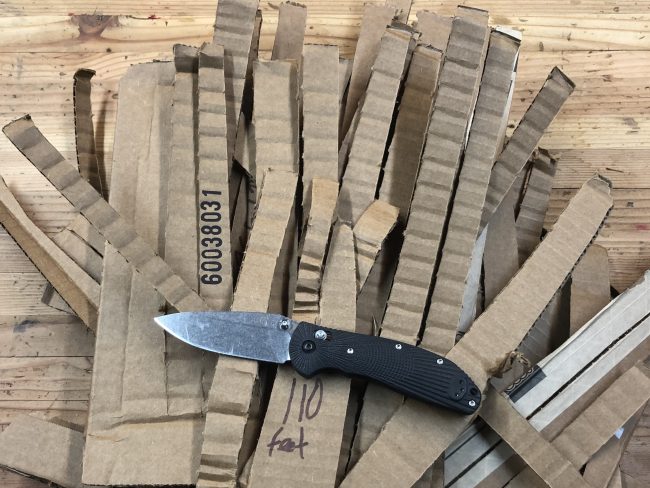 In my previous blogging gig, my partners and I came up with a series of reader-replicable tests that were at least moderately objective across different knives. It starts with newsprint slicing to test the factory edge, then proceeds to test the durability of that edge by cross-cutting corrugated cardboard. We recorded the point (in linear feet sliced) where the blade began to show signs of degrading, and then stopped testing when the amount of effort required significantly increased and the knife began to rip instead of cleanly slice. In the case of the Hogue RSK Mk1-G2, those points were 75’ and 125’ respectively.

After a couple of restorative swipes across the ceramic rods of a Spyderco Sharpmaker, the edge is tested on 3/4” manila rope. I do this test in two parts, first, I fix the rope in a workbench vise and swipe down on a taught rope. The RSK Mk1-G2 made it through in a single, slow, drawing pass in each of 3 repetitions. When cutting a folded rope in hand, it made it through in a single pass in 1 out of 3 attempts. The other 2 attempts made it greater than 75% of the way through.

Even if it isn’t meant to be a cooking knife, it is often a useful exercise to put a test knife through a series of culinary tests. 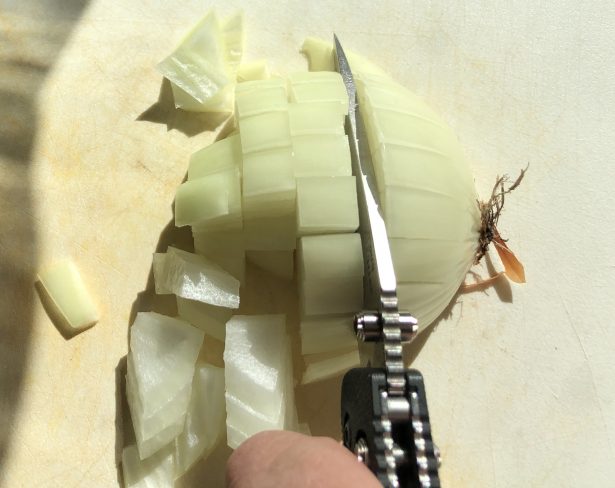 The RSK Mk1-G2 had less trouble than I expected in both the apple and onion. I was expecting there to be some wedging of the cut due to the thickness of the blade, but again geometry carried the day. 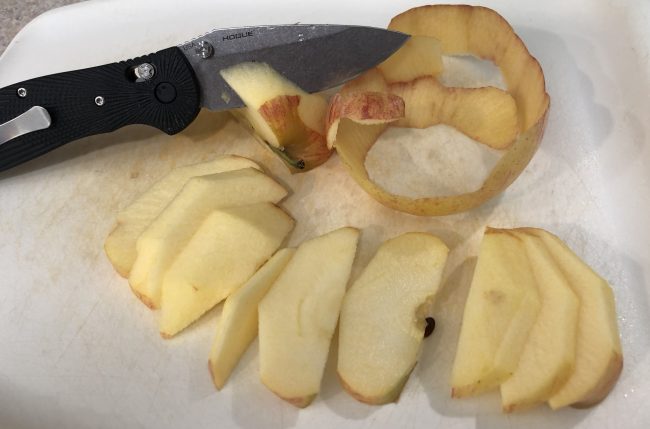 Not only was the knife able to effectively dice an onion, it performed exceptionally peeling and slicing an apple, and even more impressively peeling translucent pieces of skin from and making more than a dozen slices in a single cherry tomato. 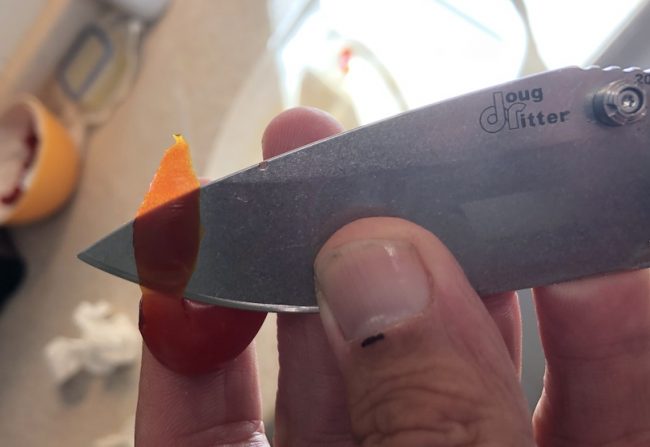 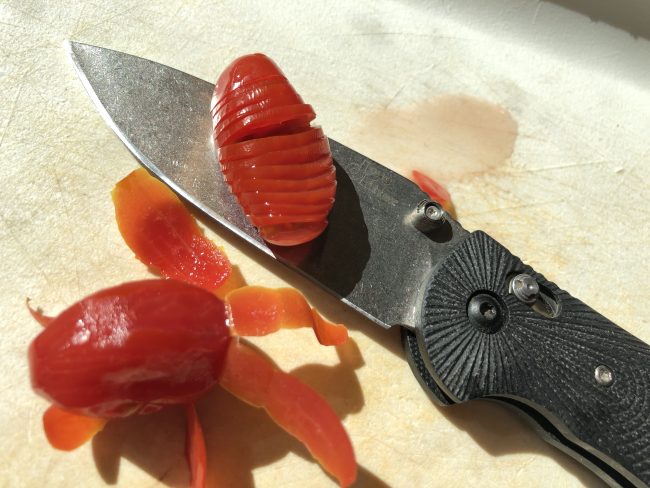 I used the RSK Mk1-G2 as my primary cooking knife on a recent week of camping. It performed admirably throughout, including on Dutch Oven pizza and a post mountain-biking steak. 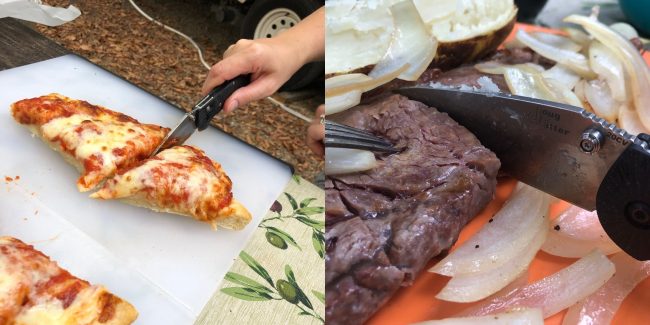 I also like to do a few wood processing tasks with a knife I am testing. Depending on the knife, the extent to which these tests applies varies greatly. 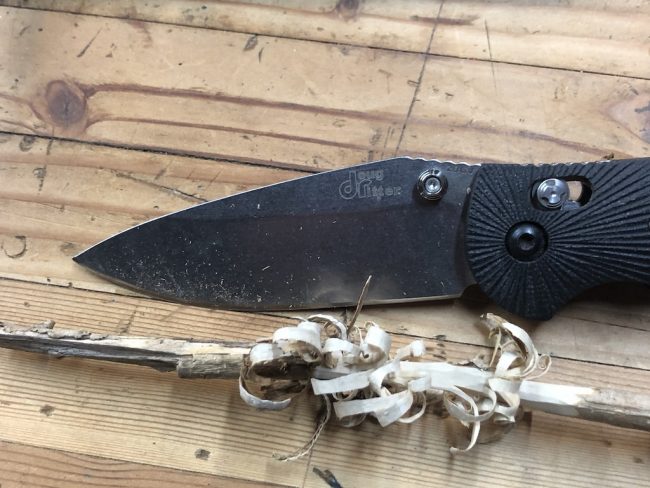 Certainly making a fuzz-stick should be within the purview of pretty much any EDC knife, and the Ritter did this just fine in doing so. 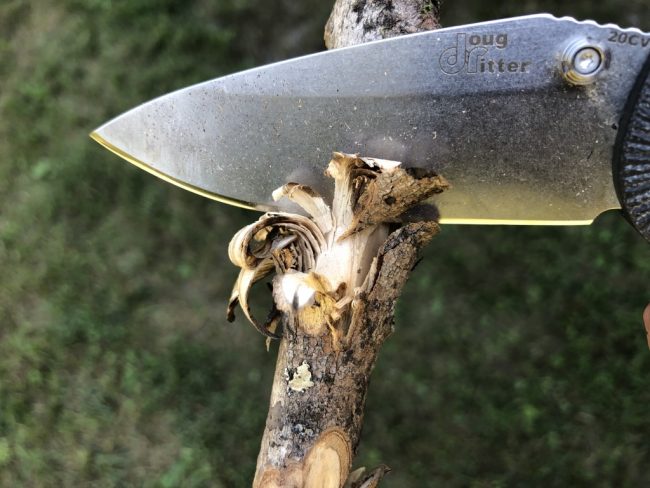 While that might be the extent of it for an ordinary pocket folding knife, RSK stands for “Ritter Survival Knife”. In addition to his hats as knife designer and Chairman of Knife Rights, Doug is also a pilot who has written extensively on survival techniques and preparedness – especially within the aviation realm. Doug designed this tool with that in mind, and so I performed a test that I would not recommend to anyone as a routine task with the RSK Mk1-G2, I did a little light batoning with the knife. In fact, most manufacturers regard this as abuse and it will void one’s warranty.

I would never try to bash a folding knife through a log of knotty maple, but there are survival instances where one might need to take down a small sapling or two. This can be for a shelter ridge-pole, staves for a medical stretcher, or even to make an improvised frog-gig. 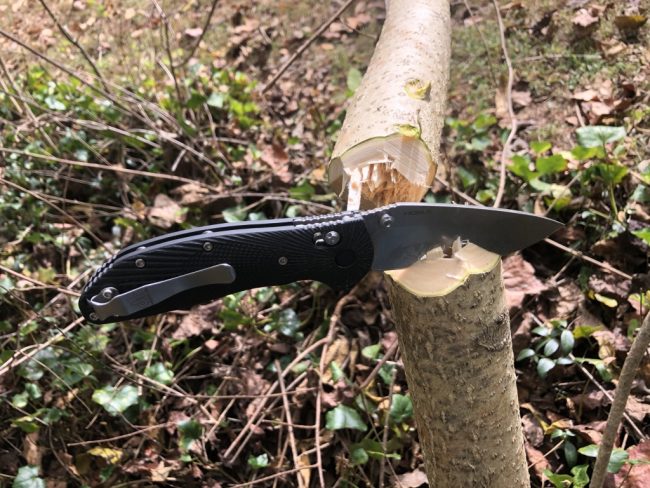 The Hogue RSK Mk1-G2 made quick work of a couple of saplings, with the only discernible effect a loosening of the blade pivot. A little adjustment with a torx bit and I had the knife pretty much back to its original state. There was the slightest blade wobble unless I tightened the pivot a bit past the factory torque, which increased friction on the action slightly, but did not otherwise adversely affect the knife’s performance.

In total, I have carried the Hogue RSK Mk1-G2 for the majority of the 2+ months since it was sent to Knife Magazine for testing. It has already earned a place in my rotation going forward, which is the biggest compliment I can give a knife – I want to carry it after I am finished with testing and review.

YouTube personality and host of The Knife Junkie Podcast Bob Demarco describes the RSK Mk1-G2 as “just feeling complete”. I have struggled coming up with a more succinct description. The swell of the handles comfortably fills the hand and the knife feels substantial in a way not matched by many production knives, especially those with an MSRP under $200. The blade is large enough to be useful across a whole range of tasks, and the geometry allows it to perform these tasks efficiently. Yet it rides comfortably in the pocket, and is no more noticeable than many knives with a much smaller overall footprint.
The Hogue/Ritter RSK Mk1-G2 is available exclusively from KnifeWorks.com, and has an MSRP of $179.95. You can learn more about Hogue at www.knigueknives.com, or more about Doug at www.dougritter.com.