Many of you may be aware of musician Phil Collins’ interest in the Alamo and the large collection of Alamo artifacts he amassed and subsequently donated to the Alamo, under an agreement in which a large museum would be built on the Alamo grounds to house all of it.

For the record, we at KNIFE Magazine consider Collins’ donation a most generous and gracious act, and we fully support the construction of the proposed museum.

The authenticity of a number of prominent objects in the Collins Collection has been called into question and no type of object is in such doubt as the knives — most particularly the brass-backed bowie knife known since the late 1980s as the “Musso knife,” linked to Col. James Bowie by a psychic reading. (Yes, really!) 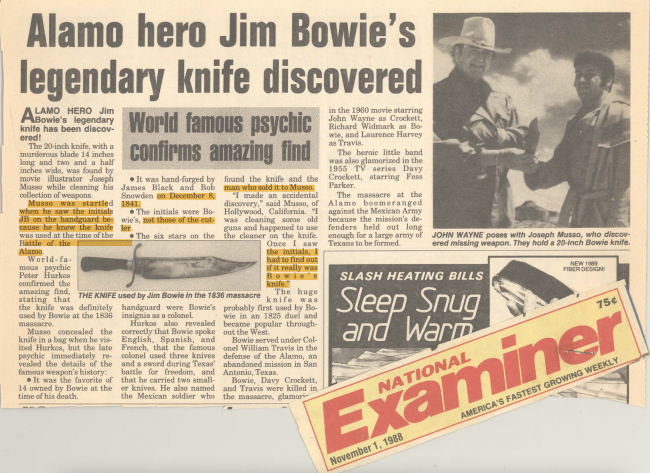 “This article from the November 11, 1988 edition of the supermarket tabloid National Examiner says a lot.”

KNIFE Magazine editor Mark Zalesky, a longtime collector and student of antique bowie knives, and Antique Bowie Knife Association President Dale Larson got involved when they learned that the Musso knife was on track to be enshrined as “Jim Bowie’s knife” on the most sacred ground in the State of Texas. “Ever since the Musso knife appeared in the late 1980s, experienced collectors have viewed the knife as a counterfeit and the ‘evidence’ presented to support the owner’s claims mostly fanciful speculation,” says Zalesky. Ultimately, the owner “…found a community that accepted it – the Alamo community. And then he found a fellow who had a lot of money and wanted Jim Bowie’s knife.”

The rumored sale price, according to a Texas Monthly article? $1.5 million. Read the whole article here.

“That’s an awful lot for a 50 year-old counterfeit associated with James Bowie by a psychic reading,” says Zalesky. He adds that there is plenty of evidence the knife is a modern fake. 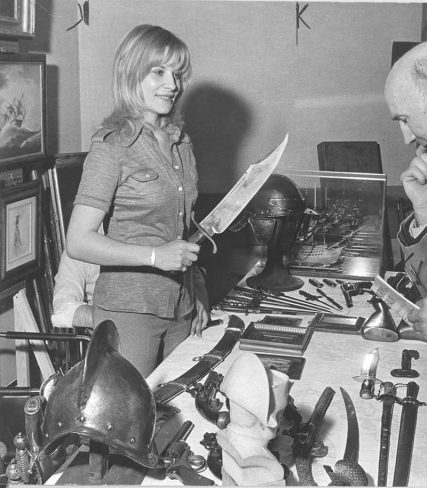 If this is James Bowie’s knife, what was it doing in London in 1972, at the table of a known associate of “Dickie” Washer, the infamous dealer in counterfeit bowie knives? (Photo from the archives of the London Daily Telegraph

Larson and Zalesky continue to work towards conclusive proof that the Musso knife is not authentic, studying the materials and construction methods used on known authentic 19th century bowie knives and comparing what they find to the Musso and other suspect knives. “Testing done on the Musso knife 40 years ago was conducted by a lab that clearly stated they did not have enough information about early 19th century materials to verify the claims the psychic made about the knife,” says Zalesky. “So we’ve gathered that information and conducted extensive testing ourselves.”

Researcher and long time collector of arms and armor Dale Larson noted:
“Metallurgical analysis cannot date a knife to the 1830s or any other narrow time period. It can ONLY tell you that the metal is either consistent or inconsistent with the metallurgy of other knives known by other means to be from the target period. The metallurgy of the Musso Knife blade, as reported by the the lab that tested it, actually showed the metallurgy is consistent with certain relatively modern steels and absolutely inconsistent with the metallurgy of dozens of genuine 19th century blades that have been tested.” Zalesky adds, “The Musso knife, and similar knives with similar claims, are made from 50-year old materials using 50-year old techniques — not 185-year old materials and 185-year old techniques. There’s really nothing to debate, unless you value a psychic’s word over science and analysis.”

“This project has taken a lot of time, and cost a lot of money,” Zalesky admits. “But if you’re passionate about the history of knives in America, what could be more important than preventing a fraud from being publicly represented as the most important knife in American history? It’s not often that a knife historian gets to provide a public service.”

For the Texas Monthly story on the Collins collection, how it came to be, the dealers who sold objects to Collins and their “authentication” methods, we encourage you to check out the full story in the June 2021 edition of Texas Monthly or online at  https://www.texasmonthly.com/being-texan/next-battle-of-alamo/

(The previous owner’s and dealer’s ‘story’ on the Musso knife as presented in the article is garbled and not entirely accurate, but it will give you an introduction to the subject from their perspective. Watch for the real truth to be revealed in the months to come!) 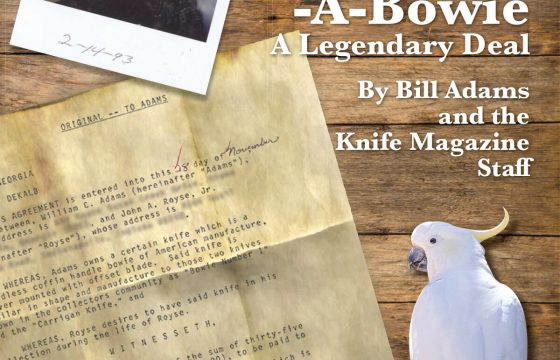 The True Story of the Rent-a-Bowie: A Legendary Deal