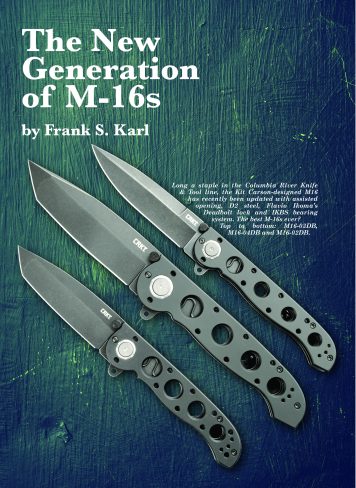 The New Generation of M-16s
by Frank S. Karl

It’s 1999 and Columbia River Knife and Tool has a tiger by the tail, but they don’t know it yet. The five-year-old company has been working with knife designer Kit Carson on an innovative design called the M-16.
Kit Carson, a 20 year veteran of the Army, has some new and interesting ideas for a knife. He brings his experience in the service to his creation, the M-16 knife. It is an astonishing success. The M-16 knife and its variants find a way into the pockets of many of the military. Not to be outdone, the civilian and police markets embrace the M-16 knife family.
The strong, overbuilt knife and its flipper mechanism quickly become popular. Both CRKT and Kit Carson are credited with making the now ubiquitous flipper popular. Shortly after the M-16’s introduction, the flipper becomes known as the Carson Flipper.
Other companies mimicked the style, but never achieved the long-lasting success of CRKT’s M-16 family. The M-16 remains one of CRKT’s top sellers over the years.
Kit Carson passed away all too soon in 2014, but his design remains a tribute to his innovation.
The turn-of-the-century M-16 was a great knife, but twenty-some years later there is some room for improvement. CRKT has redesigned this classic with improved blade steel, assisted opening, and the Deadbolt lock. And frankly, I think they have another tiger by the tail.

This article appears in the March 2022 issue of KNIFE Magazine. We posting it on the free side of the paywall for your reading enjoyment. Click the blue button below to launch the flipbook.

If you want to see each new issue of KNIFE Magazine in digital format, along with our entire 40 year archive of KNIFE Magazine and Knife World, check out our Premium Online Membership. It is just $19.95/yr or $9.95 for existing print subscribers. 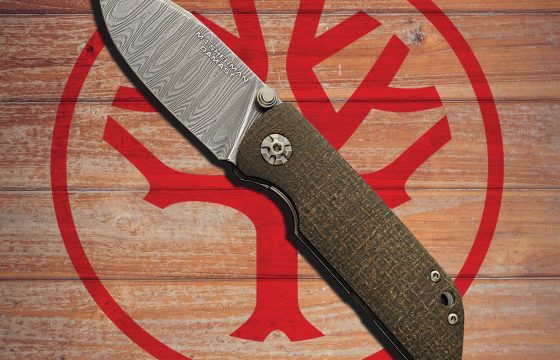 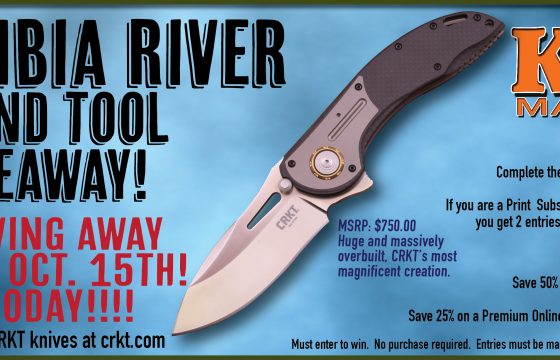