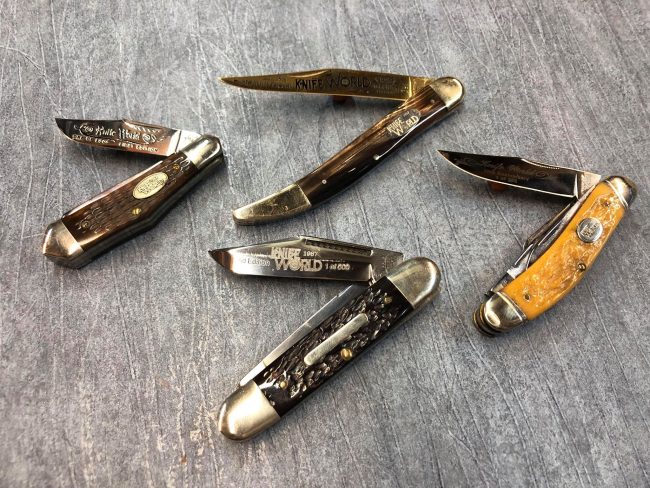 Every 5 years, from 1982 through 1992, our predecessor publication Knife World commissioned limited edition knives which were offered for sale to subscribers. It has been 27 years since the last of these quinquennial releases but 4 lucky online readers will get a chance to own a genuine piece of Knife Magazine history. We are reaching into the company vault and giving away one of each as a part of our 100 Knives in 100 Days Giveaway.

If you want to win one of these rare collectable knives, register for a free KnifeMagazine.com account, and leave a comment on our Official Contest Thread.

While you are at it, be sure to leave a comment on the David Kurt RN Tactical Knife post as well. That is the final knife in our giveaway, and it is open to all our users, even if you have won a previous drawing.

As an aside, due to some 2nd Chance drawings for some unclaimed prizes, we are going to be going into overtime as we finish up our contest. The remaining drawings will be as follows:

I am going to be camping with my son’s Cub Scout Den on Saturday, so I will be doing a double drawing on Sunday Night. 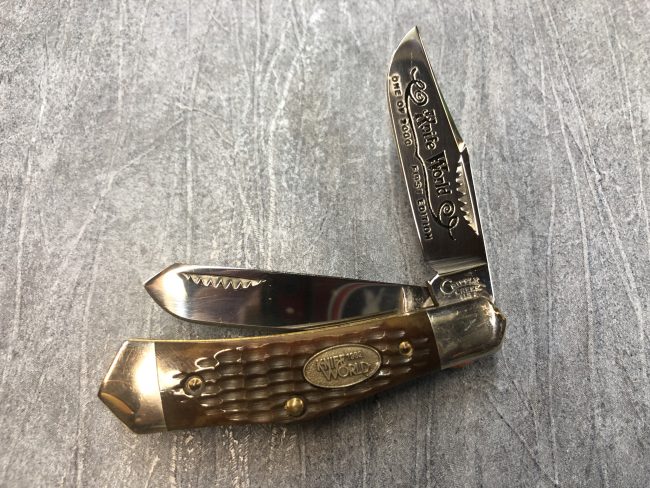 This knife was made in an old Union Cut. Co. pattern, and is best described as a swell-center jack that has a ‘kink’ in the center, with candle-end bolsters and trapper-style clip and long spey blades. The handles are brown jigged bone, ranging from honey colored to a deep brown depending on the knife. 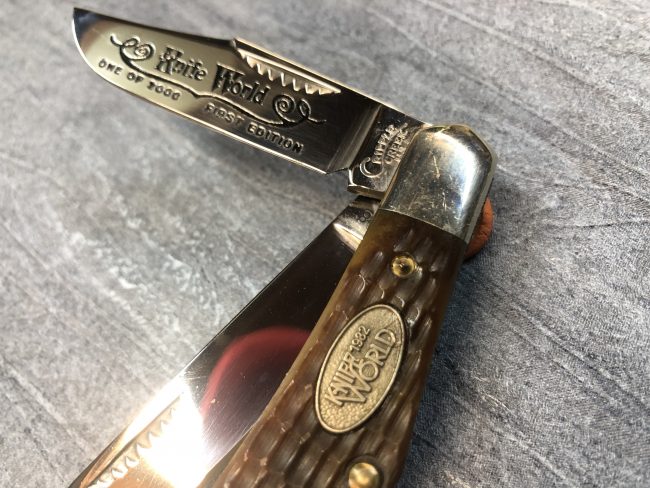 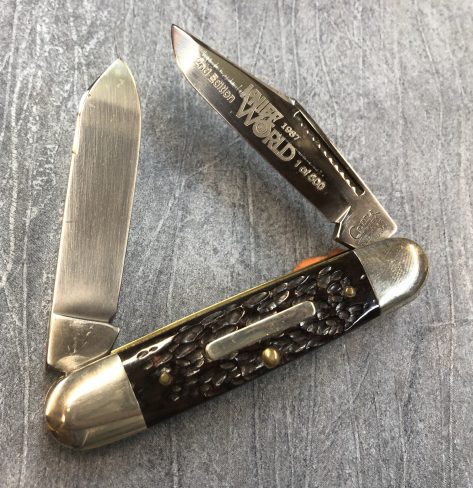 This knife is a large equal-end ‘cigar’ pattern, with big clip and spear blades in a moose configuration (i.e. one from each end.) The handles are a deep brown jigged bone. Original cost was $65. These are rather difficult to come by.  The knives with lower serial numbers were made without a center liner, and bring an additional premium over the higher serial numbered knives. (The reason the center liner was added was to help prevent the blades from rubbing against one another.) 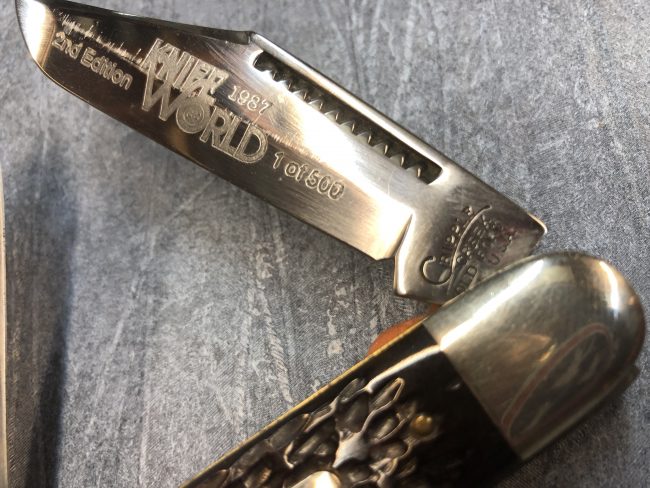 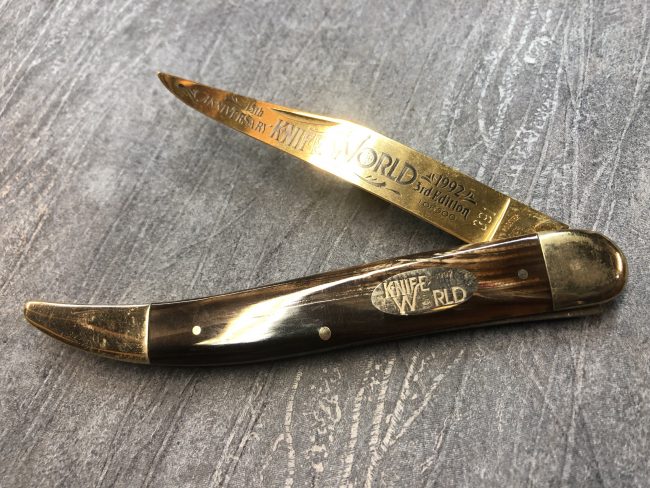 This knife is a large ‘powderhorn,’ ‘Texas toothpick,’ ‘tickler,’ or whatever you might want to call it. It has a gold washed clip point blade and buffalo horn handles that range from black with white streaks to some that are mostly greenish streaked. A really flashy knife. 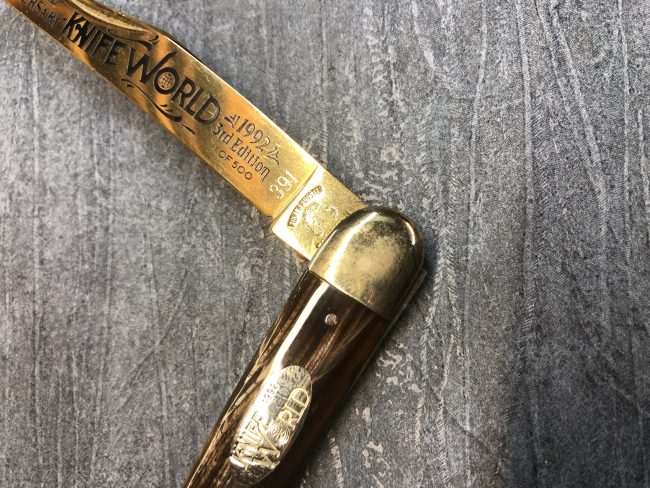 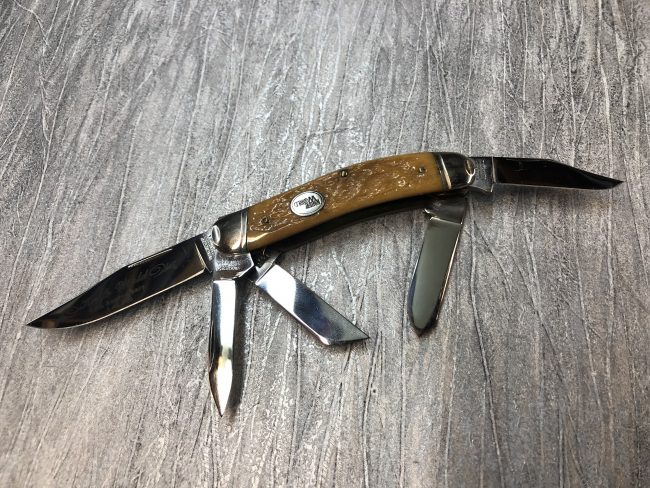 One of the hottest patterns in knife collecting, this 5-blade Sowbelly Stockman measures a full 3-7/8″ long, with honey bone handles, slanted-pinched bolsters, a special Knife World shield, and a blade etch designating each knife as one of 350. Each knife is serial numbered. 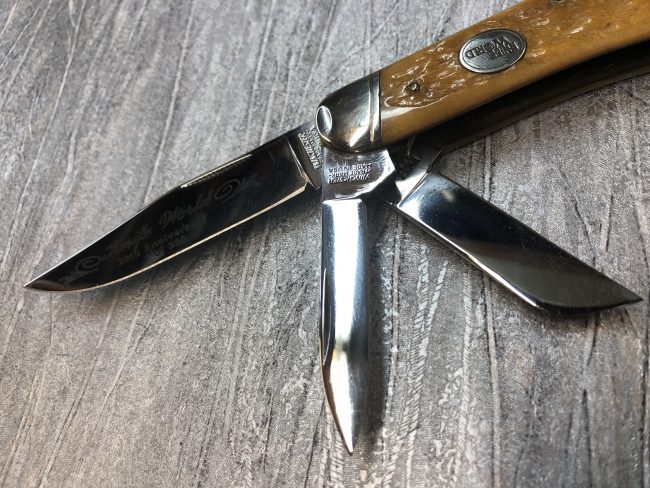 Good Luck everyone. And thank you everyone for making this contest a lot of fun along the way. 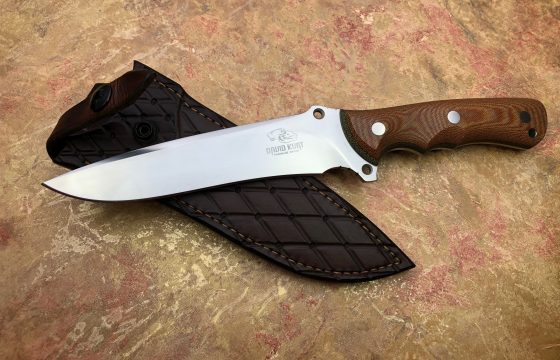