A Visit to Rowen Manufacturing
By H. Clay Aalders
(Editor’s Note: This article first appeared at The Truth About Knives. Used with permission of the author)

It has been two weeks to the day (at the time of this writing) since I had the privilege of visiting Rowen Manufacturing, the manufacturing partner for ESEE Knives. Rowen makes all of ESEE’s fixed-blade knives in Idaho Falls, Idaho.  ESEE is the knife offshoot of Randall’s Adventure Training, and rather than butcher the specifics of the company history, I refer to the ESEE Knives website:

Beginning in 1997, Jeff Randall and Mike Perrin started down the path of changing the way the survival and wilderness industry did business. Having become frustrated with the endless amount of exaggeration and hype often associated with “survival” gear and training, they started Randall’s Adventure & Training to bring realistic tools and knowledge to the consumer. Working under contract with the Peruvian Air Force’s “Escuela De Supervivencia En La Selva” (School of Jungle Survival), also known by the acronym ESSEL, they introduced many clients to the art of jungle survival in the vast Peruvian Amazon jungle.

After several years of operating in South America, they brought their training stateside and added a sister company that produces high quality field grade knives and gear. One of their first designs was the RTAK made by Wicked Knife Company in Arkansas, then later produced by Ontario Knife Company. They also introduced the Laser Strike that was built by TOPS Knives. After spending 5 years designing the RAT line of knives for Ontario, they formed their own knife company named RAT Cutlery with Rowen Manufacturing in Idaho Falls producing their line. The name was later changed to ESEE Knives to avoid confusion with the Ontario produced RAT line of knives. While most all of their current line is now produced by Rowen, Jeff and Mike still design for other companies, such as the Blueridge Knives’ Avispa and Zancudo folders and Ontario’s Model 1 and Model 2 folders.

Rowen Manufacturing is a family company, headed by Shon Rowen, who has been a machinist and metalworker since childhood. He learned the craft from his father, who himself was a machinist. Shon led me on a tour of their manufacturing facility during my trip West. 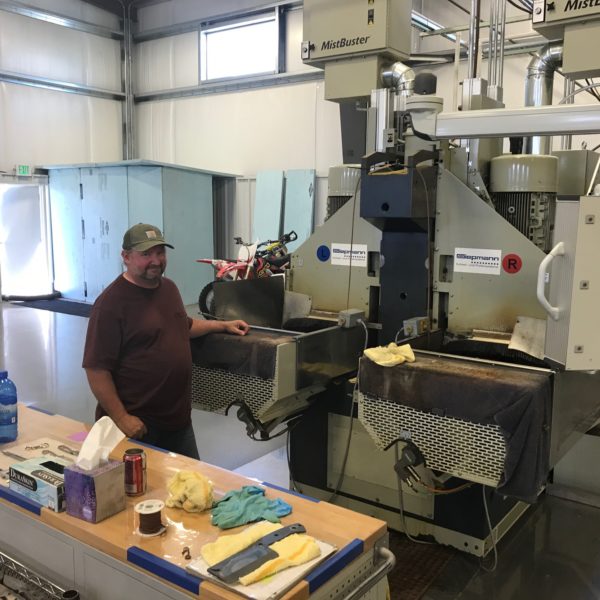 I also visited TOPS Knives while I was in Idaho, and there were noticeable differences between the two facilities. Where TOPS has enlarged and modified their facility as they have grown, Rowen is a relatively newly-built, purpose-designed facility which they  moved to when they outgrew their previous one. The new facility is open and bright. I couldn’t help but notice the state-of-the art climate control. Shon remarked that people do better work when they are comfortable. As someone who worked at a boat-building company when I lived in Idaho myself, and I must admit I was a little retroactively jealous. I definitely see his point. 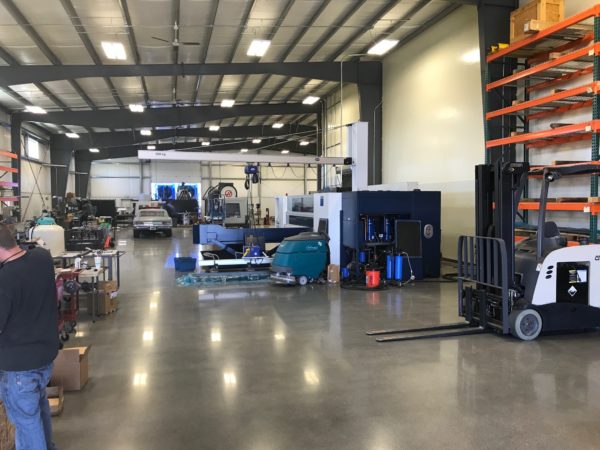 The metaphorical (and geographic) heart of the Rowen facility is an enormous computer-controlled laser cutting table. I had never seen one in person, and it is truly something to behold. There are two movable table-surfaces, where the sheet steel can be loaded on one while cutting takes place on the other. Upon completion, the tables rotate, and the next sheet gets cut. 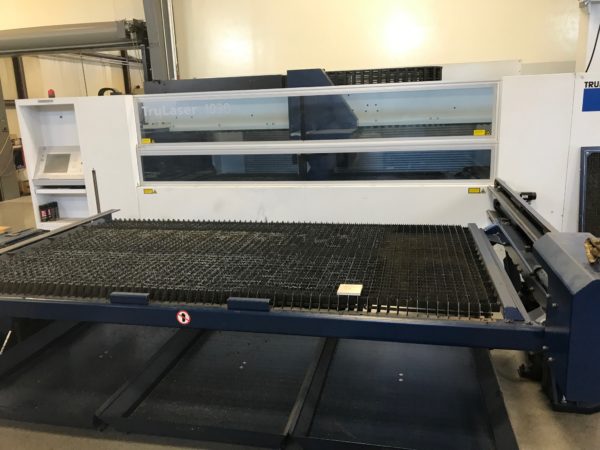 Following this process, the blanks head to the CNC grinders, and the remaining sheet is tossed into a dumpster for recycling. 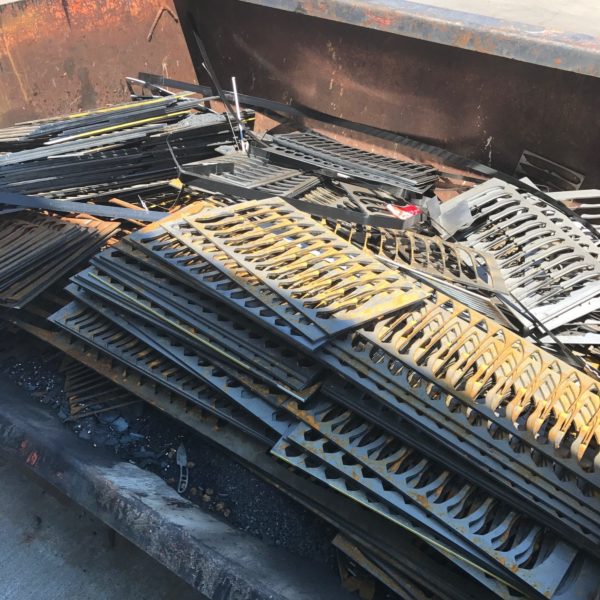 I mentioned how cool I thought the offcut sheets looked, and Shon was gracious enough to let me take one home as a unique souvenir of my visit. It is going to look awesome hanging on the wall of my workshop. I just need to figure out a way to hang it properly. It is heavy. 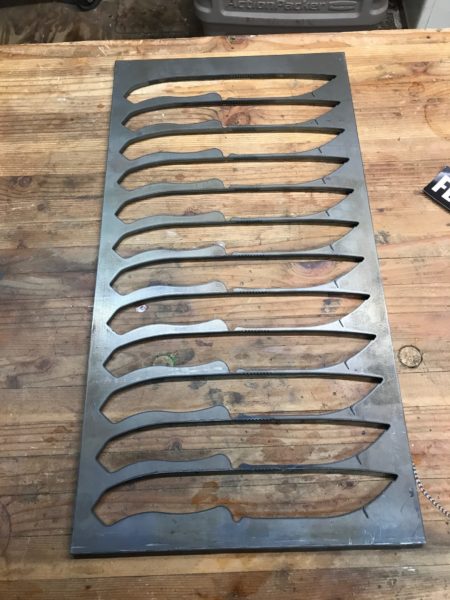 This will make great wall art in my shop

When I visited, they had just finished cutting a run of their new PR4 Kephart knives. Looking at the newly-cut blanks, I was amused that somewhere in those bins is the PR4 that ESEE will be sending me for testing and review. I wonder which one it is. 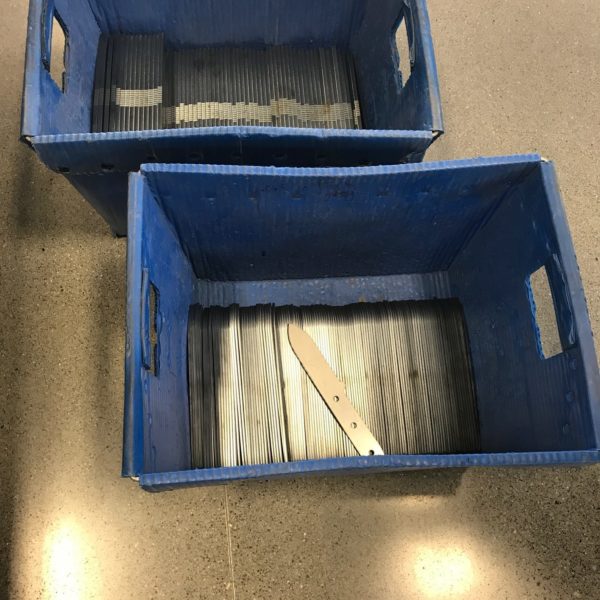 Mine is in there somewhere

I wonder which one will be mine?

I can’t wait to carry the PR4 on the very streams in TN and NC that Horace Kephart roamed 100 years ago. 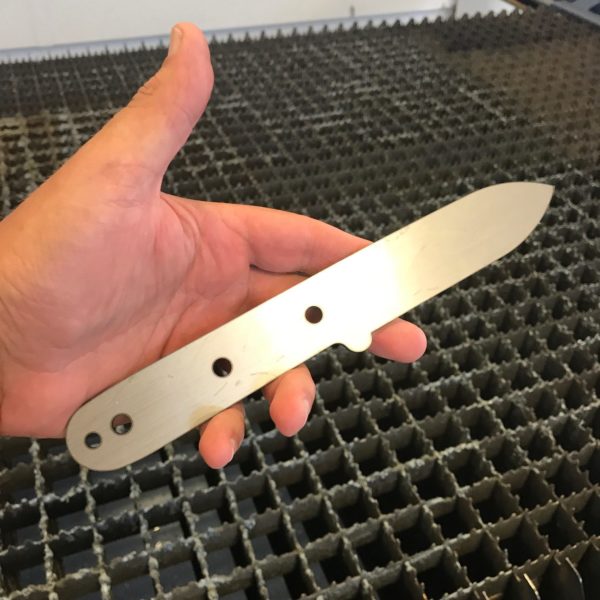 The CNC machines were not running when I was there, but Shon showed me an idle machine with an Izula in it. The CNC grinds one side, the blank is flipped, and the other side is ground. 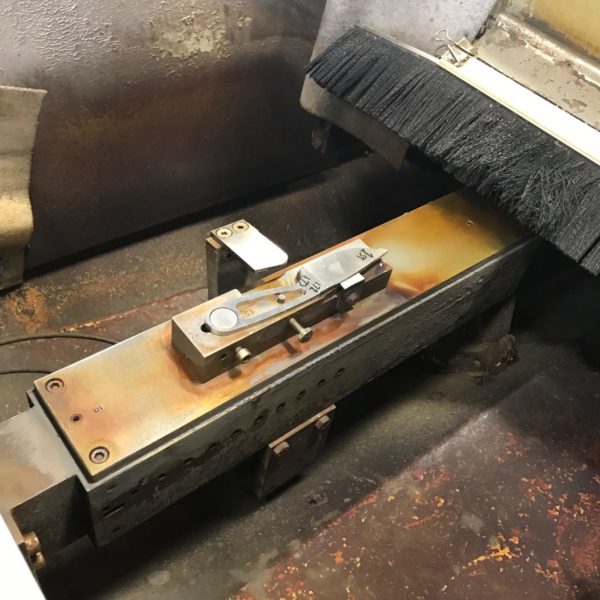 An Izula inside the CNC grinder

Heat treating is done on site, and is mostly a one-man show. Shayce was working away on a batch while I was there. In a somewhat low-tech start, the blades are pre-heated to 600 degrees on a gas grill. This pre-heat stage helps standardize the timing in the ovens. It was an efficient process, with one pair of knives going from grill to forge, the ones in the forge going into quench, and then to a rack. A timer is restarted, varying with size and thickness of the blade, and when it goes off, the process repeats. 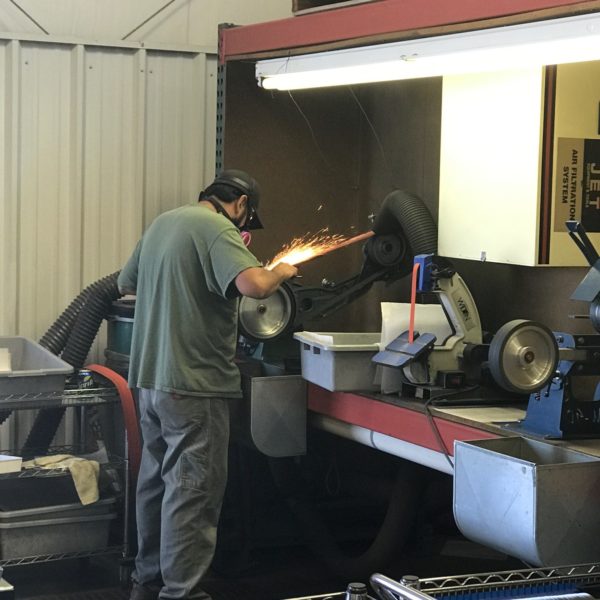 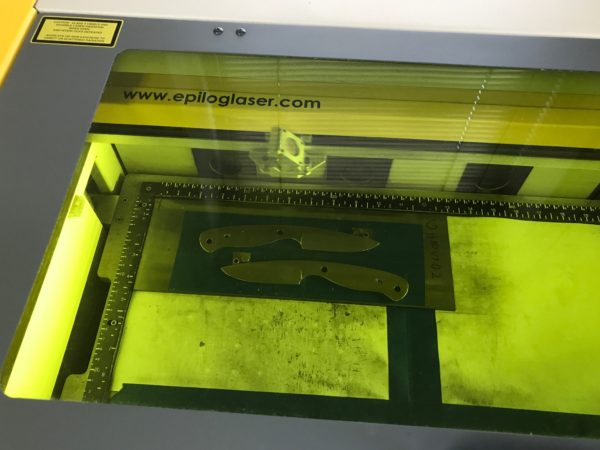 Handles, coatings (other than powder-coating), laser engraving, and final sharpening are all done in house. The blades are sheathed, packaged and sent out to ESSE dealers in the final step in the process. 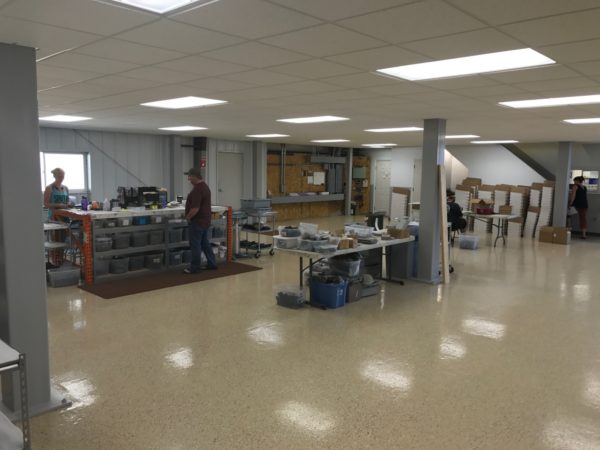 I would like to thank Shane, my contact person at ESEE for facilitating this visit, Shon Rowen, who took time out from dealing with some personal issues to show me around, Shayce for letting me bother him while he was working, and all of the rest of the folks at Rowen Manufacturing who greeted me warmly and didn’t mind my poking around taking pictures.

I will close with several other pictures that didn’t fit neatly into my narrative. 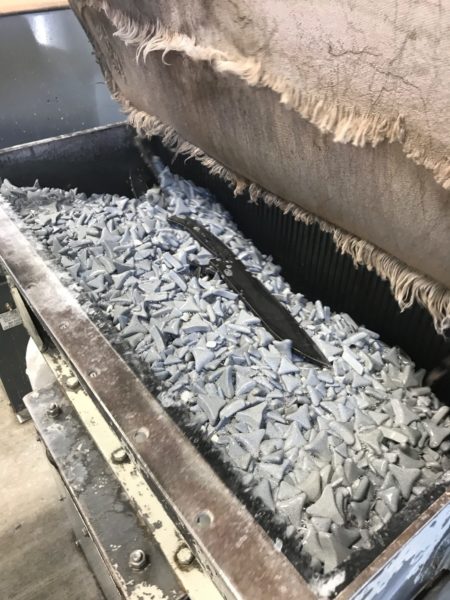 Like I did at TOPS, I found the tumbling process strangely hypnotic. 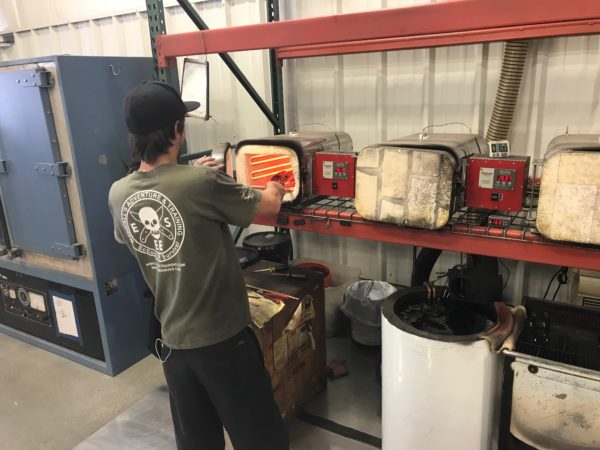 Anyone want an Izula? 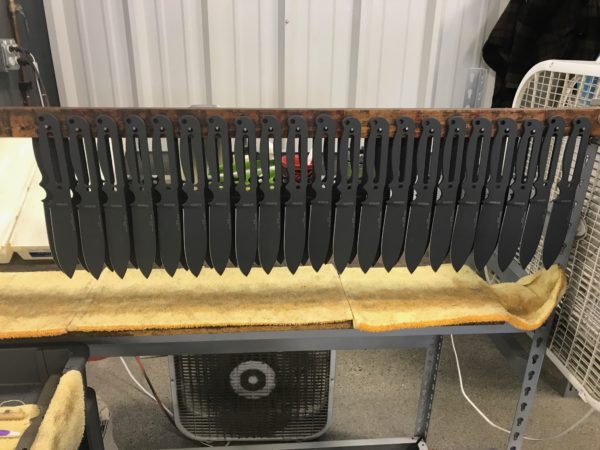 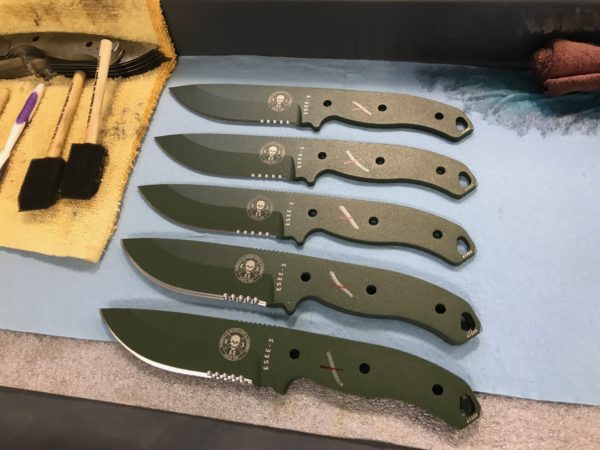 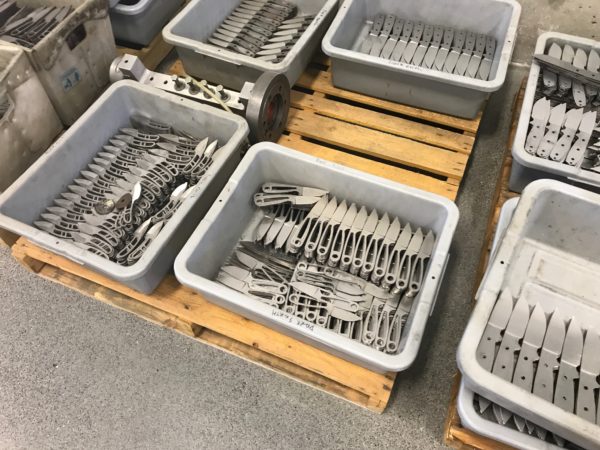 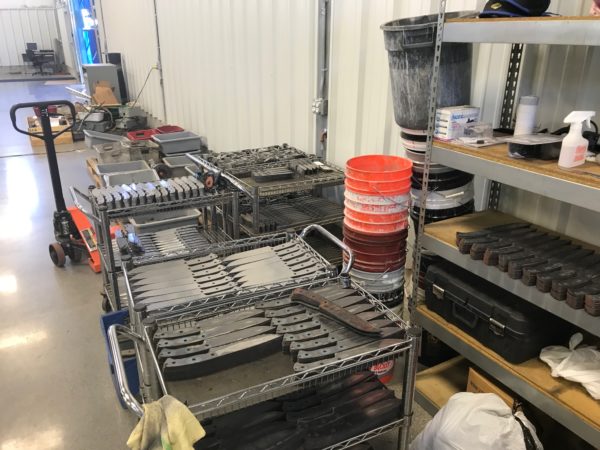 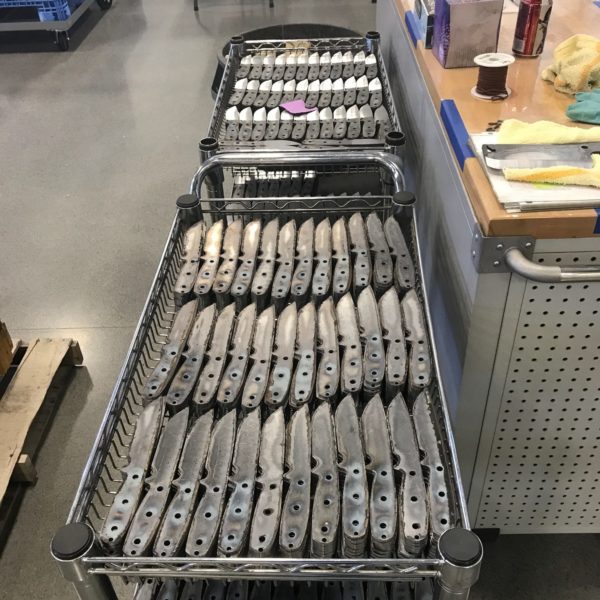 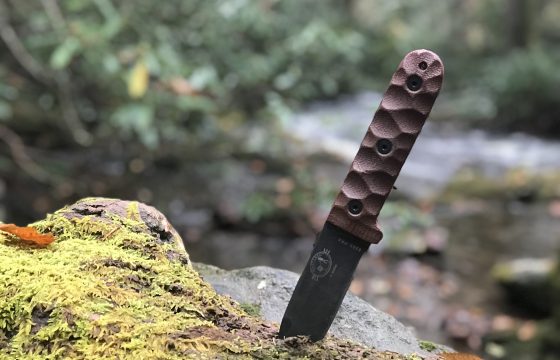 Knife Review: The BeckerHeads take on the ESEE PR-4 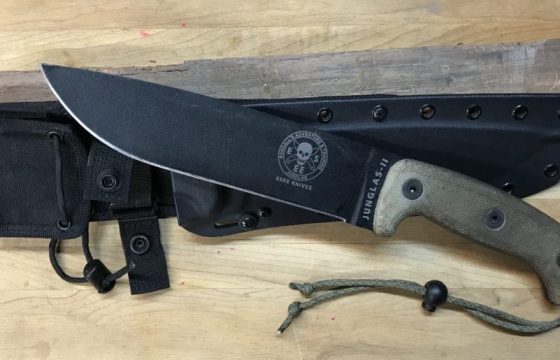 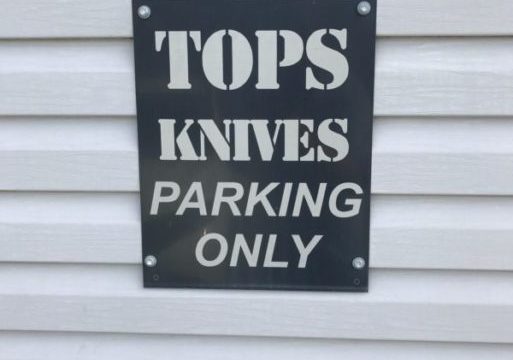