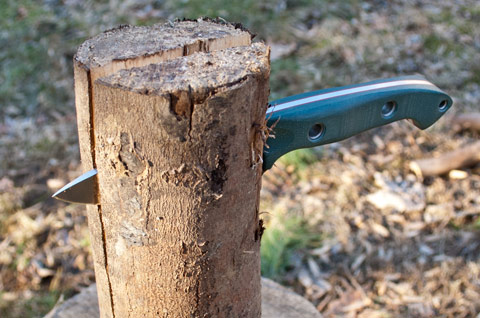 In Defense of Batoning
by David Andersen

(Editors Note: This article originally appeared at The Truth About Knives. Used with permission of the author)

Hyperbole Alert: There are two types of people in this world–those who believe batoning is a valid way to split wood, and those who do not. These people say that an axe or a hatchet provides a far more effective way to achieve the task than any knife, and decry batoning as abuse–indeed the technique can break a lesser knife. To a certain extent I can see where they are coming from, but I am here to offer up a few situations where knife beats axe.

For those who are not familiar with the concept of splitting wood with a knife let us see what the Wikipedia hive mind has to say on the subject:

Batoning is the technique of cutting or splitting wood by using a baton-sized stick or mallet to repeatedly strike the spine of a sturdy knife, chisel or blade in order to drive it through wood. [link]

This is a technique that is talked about often when discussing the subject of “survival”, but the method is just as valid in more mainstream situations. The typical car camper has just as much reason to baton as anyone else. Here are my reasons why: 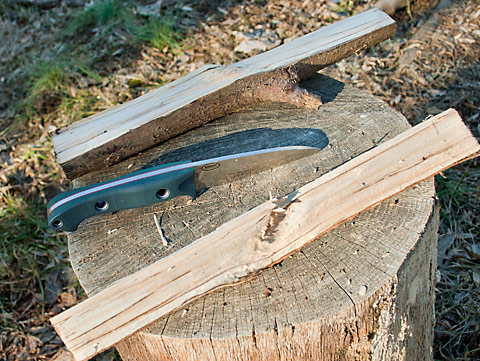 One of the things I internalized from my time as a Boy Scout is that one must be very careful when using an axe. A missed strike can quickly turn into a leg injury. One must also be very aware of your surroundings, specifically people going to and fro in a busy campsite. We would always rope off a “blood circle” for safety, but awareness was still key.

It is for these reasons I argue batoning is a safer method much of the time, especially for those inexperienced with an axe. The sharp edge of your tool is not being swung around, making it much harder to injure yourself. And if your space is limited, such as in a typical state park camping pad, there is less worry about injuring those you are camping with via an inadvertent strike. If you are a parent with young ones that like to scamper about, this can be especially crucial.

In order to get the most out of an axe or a hatchet, some sort of chopping block is a must have. But what if one isn’t available? From my own experiences this can make your axework much more laborious. If all you have is soft ground, you have to be aware that any stones in the earth can wreak havoc on your edge. Additionally, much of the energy from your swing will actually transfer through the wood you are trying to split, and disappear into the dirt.

If batoning, however, you can take advantage of any hard surface around you. Be it a rock, a picnic table, even a tree root, batoning allows you process your firewood more efficiently as the energy you expend is going exactly where you want it. 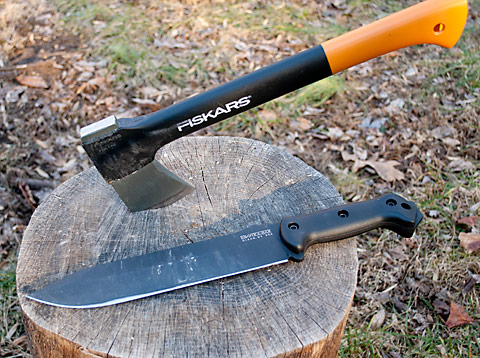 Let’s say you do have a nice stump on which to place your wood. This works wonderfully if you are dealing with cut logs, but what if you are unable to stand your log on its end in order to chop it? Mangled ends are no problem at all when batoning.

One argument I have heard regarding the big knife vs hatchet debate is that a hatchet of the same weight will be far more useful than a knife. Let’s take a look at batoning from the hiker’s perspective.

First off, you will certainly be dealing with improvised work areas and less than optimal wood  when hiking. In regards to weight, most backpacking hatchets have at least a 1 pound head. The Gerber Back Paxe, a hatchet designed specifically for the backpacker, weighs a full 1.2125 pounds. When you can carry a large knife, like the Becker BK9 which weighs only 1.05 pounds (a smaller blade paired with a folding saw can weigh even less), the choice for me is pretty obvious. In addition to being lighter, more versatile and easier to pack than a hatchet, the large knife will chop well enough for a hiking situation and will split your wood more safely and more efficiently.

These are a few of the reasons that I baton my wood, even in preference to an axe at times. Obviously, a very sturdy knife is needed, and there are plenty of designs on the marketplace, at nearly every price point, that will do the job. What about you? Do you baton? Let us know in the comments. 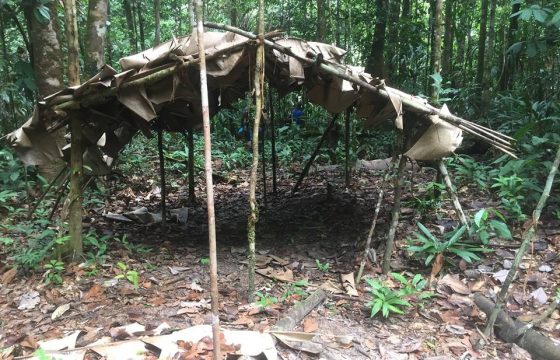 An Old-Guy Trying to Understand Bushcraft 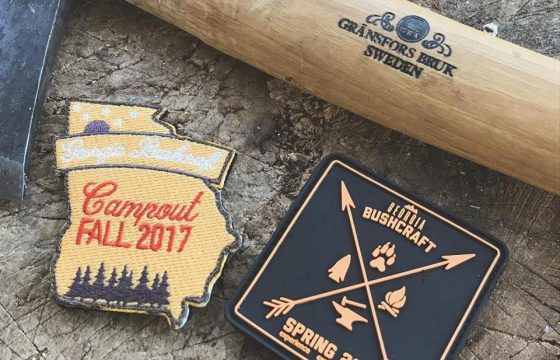