(Editor’s Note: This article first appeared at The TruthAboutKnives. Used with permission of the author)

Super thin blades with highly wear resistant steel are what Big Chris does best. The Big Chris Pocket Fighter is the epitome of that expression. With its CPM-10V steel and burlap micarta handle scales it makes an attractive and lightweight knife. The question is, how well does it hold up?

The Pocket Fighter represents a few firsts in my knife experiences, the materials being all new to me. This is my first exposure to both CPM-10V and to burlap micarta.

10V’s raison d’être is edge holding, and the thin blade on the Pocket Fighter means it ought to cut like a laser for a long time. It isn’t stainless though, so you’ll still have to take care of it, lest it rust. The handle scales are by Shadetree Custom Composites. This particular pattern is called Maroon Houndstooth and is made up of opposing strands of maroon and gold thread. It not only look awesome, but I think the scales even weigh less than standard canvas micarta varieties.

This knife came with a kydex sheath, also made by Chris, which you can thread with cord, or fit with a Tek-Lok for belt carry. Like the sheath that came with the Hiker, there is a nice cutout for your index finger which facilitates a full grip on the knife before drawing it. This is a nice touch that allows for fast deployment of the blade.

Despite the aggressive name, Chris sees this knife primarily as an everyday carry fixed blade. He told me he often carries a similar knife around his neck for his EDC needs. That is prudent, because unless Big Chris has some big ol’ pockets, this is not a package that will fit in your standard issue blue jeans.

Knife seems too big for neck carry, you say? Despite the size, weight is not an issue. Sheaths included, the Pocket Fighter is barely heavier than my ESEE Izula-II! (4.6 oz. vs 4.0 oz)

Chris puts together an excellent knife, but I have to mention that the handle pins were ever so slightly proud when I got the knife. You can’t really feel it in the hand, but just barely enough to catch the edge of a fingernail.

In talking with Chris, he let me know that this is a brand new material he is working with, and it requires a little different finishing technique than standard micarta. Turns out the burlap can actually absorb a lot of heat from the abrasive belts and can swell ever so slightly during the finishing process. This can cause the scales to minutely shrink when they cool down. Chris has since updated the way he finishes this material, eliminating the issue, but in the interest of full disclosure, I had to mention it.

I should stress that I found this “issue” to be very minor. It only stood out because everything else on the knife was so perfect. Chris’ work is fantastic. The grinds are precise, and the swedge is fantastically executed. The tip especially is impressive in just how acute and scalpel-like it is. 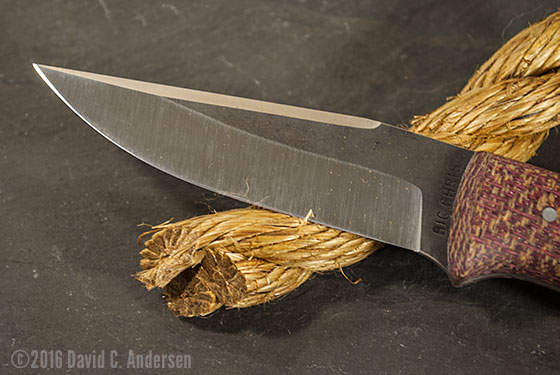 I can’t say enough about the exemplary sharpness of Chris’ blades. Not only is the blade super thin, but the thickness behind the secondary bevel is also miniscule. This makes for a laser-like edge that pushed through ¾” manilla rope without breaking stride.

The contoured scales feels great in the hand. Technically, the balance of the Pocket Fighter is very handle biased, but as a practical matter, the knife is so light that you never notice.

When I first received the knife, the handle felt very smooth, and the contouring was excellent. After cutting up some pineapple however, I could actually feel the texture of the burlap more. I thought it was my imagination at first, but some research confirmed my findings. Because of capillary action, the fibers of the very top-most layer can actually swell when wet, and will stay this way even after they dry out. Fortunately, I think this makes the knife feel even better. 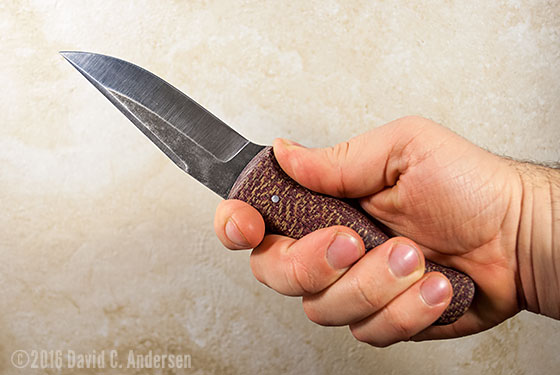 By far, the most use the Pocket Fighter saw was in my kitchen, and in that role it is great. I bet it would also be an excellent hunting knife. It is short enough to be controllable and the long swedge should minimize resistance “on the exit” when processing animal flesh.

As is my wont, I started out by cubing potatoes and onions for a hash. The blade was so thin and so sharp that I could easily dice the potatoes into morsels of minuscule proportions… too small really for their intended purpose, but impressive! The straight clip point even made a nice scraper for clearing the cutting board.

Onions too fell easily before my blade! I could paper off thin, nearly transparent slices with no effort.

I also needed some onions for a guacamole, and I was able to feather the vegetable so fine that it was practically a puree!

Next up I tackled a pineapple. Again, no sweat for the Pocket Fighter. The blade melted through the fruit and made mince of the rind as well. The burlap scales held their grip just as well as any other type of micarta when soaked in juice.

The knife’s skillset is not limited to just plant matter. As I mentioned earlier, I think the PF would make a good hunting/skinning knife. It assisted me in dismembering a ham, where it sliced like a demon and separated various muscle groups like (I promised myself I would never use this phrase in a knife review) a hot knife through butter. Pardon the cliché, but it is a wholly accurate description of the way the knife felt.

I can’t understate how sharp this knife was when it arrived. More than once I accidentally shaved off pieces of bone without even realizing it, with no damage to the edge at all.

The blade is thin enough that it can even slice hard cheeses provided the blade is long enough for the block you are working. This 3.5” piece of cheddar is about the max you will be able to get away with, but I have chef’s knives that can’t cut the mustard… er, cheese… as well as the Pocket Fighter.

The blade will patina, although not quickly like simpler carbon steels. I left the blade coated in the ham juices for about an hour, and only some light spotting occurred. A quick rub with some Barkeeper’s Friend had it looking like new.

Just kidding! With a super thin blade and a long swedge that is ground thin enough to be almost sharp, there is no way I’m batoning this guy!

The blade geometry of the Pocket Fighter is not the best for bushcrafting chores. My go-to woodcarving tests resulted in a split decision. The blade was so sharp that it loved to bite deep into the wood. This made for easy points and notches when making tent pegs. Conversely, I found it difficult to make a good featherstick. I had a hard time keeping the edge from biting too deep, and more often than not I would accidentally slice off the curls at the terminus.

Last, but not least, the gauntlet of cardboard.

After a quick strop to ensure I started with a hair shaving edge, I started I cutting. The way the thin blade went through the cardboard was mesmerizing. I was literally peeling ribbons of cardboard for over 530 linear feet. Even after that much, there was only a slight, slight increase in the effort needed.

I checked the edge near the heel of the blade, and while it was no longer quite shaving sharp, other parts of the blade still were. It could also still cut phonebook paper acceptably. I also tried a fresh cut through the same manilla rope as earlier, and while it was not as zippy as before, it still left a fairly clean cut; it even managed the job better than many factory edges.

10V has a reputation for difficult sharpening, but I found that hard to evaluate with the Pocket Fighter. Reason being, the secondary bevel was so thin that the effort needed to hone the edge was not very much at all.

Using a loaded strop, I didn’t quite get the edge back to where it started, but I got darn close with about thirty strokes per side with black compound, then twenty-per with green.

Chris’ way of making this knife out of such thin metal seems a great way to take advantage of these types of wear-resistant supersteels. All the benefits of long edge holding with easier maintenance and maximum cutting efficiency.

I didn’t feel the same immediate affection for this knife as I did for Big Chris’ Hiker, as the Pocket Fighter is a different animal than anything else in my collection. The more I used it though, the more I was impressed, and eventually became attached to it even more than the Hiker.

Main uses? While the light weight would make it attractive to ultralight backpackers, I would recommend something with a bit thicker blade – like the aforementioned Hiker – that could whittle better, and with no swedge to allow batoning in an emergency.

If you can carry a blade of this length day-to-day, you will find it an exceptionally efficient slicer with a long lasting edge. It would also make a fantastic hunting knife, and can be a very handy blade in the kitchen.

I am very happy to say that this handmade slice of goodness will be staying in my collection! The Pocket Fighter arrived for testing before I had sent the Hiker back to Chris. He allowed me the option to keep one of the knives once the reviews were complete. I had to choose this one. When it comes to pure slicing efficiency, the Pocket Fighter is absolutely brilliant!