For those not familiar with Kid Curry, he was a member of Butch Cassidy’s gang, and has a connection to Knoxville, TN, home of KNIFE Magazine.

When sober, Harvey Logan, a.k.a. Kid Curry (member of Butch Cassidy’s Wild Bunch and killer of 40 men) was mild-mannered, likable, and loyal. Problem was, Kid Curry didn’t particularly like to be sober much. He preferred alcohol and women (as evidenced by the fact that Kid Curry was credited with as many as eighty-five children by prostitutes throughout the country). As might be expected with a man of his interests, money did not stay in his possession for long. He would often return from a train or bank robbery, get drunk and lay up with prostitutes until his share of the take was gone. And that’s more or less what brought him to Scruffy City on that fateful day.

Following the July 3, 1901 robbery of a Great Northern train near Wagner, Montana that left a sheriff cold and stiff, Harvey Logan was able to avoid arrest for more than five months by heading east, all the way to Knoxville, Tennessee.

On December 13, 1901, as usual, Logan was passing out bills from his most recent heist, this time in an Old City saloon. His merrymaking soon went south though, after he picked a fight with a patron and shot a couple of deputies who tried to break it up. As was his modus operandi, the notorious outlaw made his escape out the back window. Alas, two days later, Logan was captured outside town and brought back beaten and bloodied to Scruffy City’s jail. It is said that more than 5,000 people (mostly women) visited the handsome outlaw in jail in the months that followed…

…On Saturday afternoon, June 27, 1903, infamous outlaw Harvey Logan, aka Kid Curry rode Sheriff Fox’s stolen horse south on Prince Street, turned east on Hill Avenue, and then south across the Gay Street Bridge onto Martin Mill Pike. Meanwhile, Sheriff Fox was hurrying to notify law enforcement in the surrounding counties of the daring escape of his murderously-tempered prisoner (member of Butch Cassidy and the Sundance Kid’s Wild Bunch) from the Knox County Jail.

As news spread, folks began to gather on streets, in homes and at saloons. By Sunday morning a crowd of thousands lined the streets around the jail. In the excitement, Sheriff Fox gave tours and showed Knoxville’s prominent citizens how Harvey Logan had escaped. Kid Curry’s daring escapade set the record for sales of newspapers in Knoxville, crushing the previous record set after the shooting of President McKinley. Meanwhile, by noon Sunday, Logan’s pursuing posse had returned, without Logan. And the sheriff’s stolen mare also returned, without her saddle. 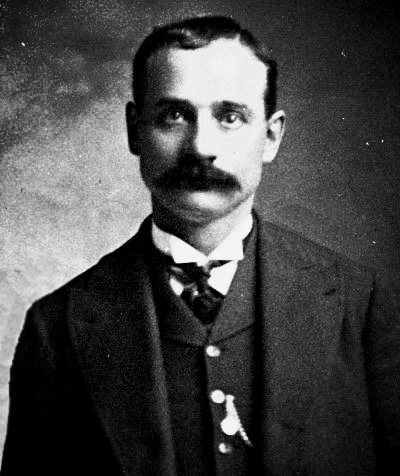 On Monday, the Pinkerton Detective Agency arrived in Knoxville to find Sheriff Fox and his guards fending off accusations of complicity with the famous outlaw. Detectives soon discovered that some of Knoxville’s prominent citizens had carried souvenirs away during their tours of the jail with Sheriff Fox. Through the newspaper, Pinkerton detectives asked that the persons who had taken the wire lasso and the ropes used in the escape of Harvey Logan please return them because they were needed in the investigation.

In the midst of all the chaos, the Pinkertons learned that Logan had returned to Knoxville for a prearranged meet-up with a fellow desperado named Sam Adkins on the night of his escape. The pair of criminals then made their way to Black Oak Ridge in North Knoxville, caught a freight train and rode it north to Coal Hill, (now Lake City) Tennessee. From Coal Hill, the detectives followed their trail north and then east as the fugitives traveled by rail and on foot into North Carolina. From there they turned southwest, following the chain of mountains that lay along the border of Tennessee and North Carolina.