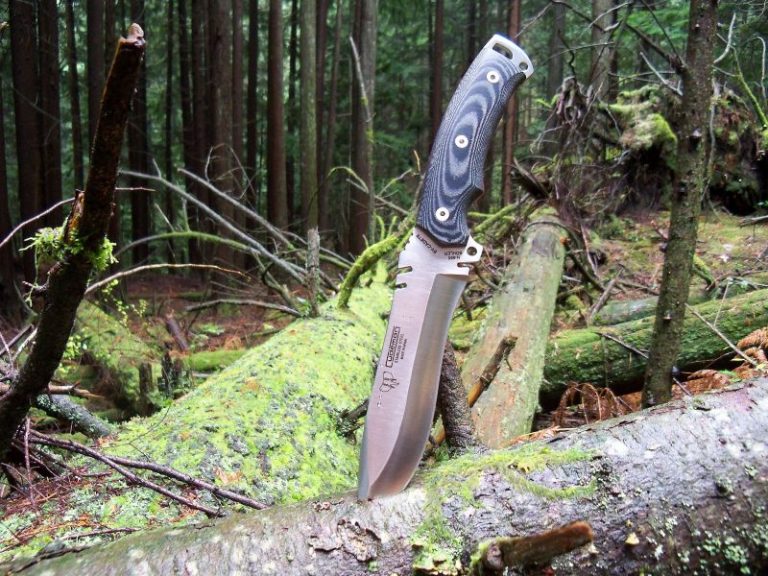 J. S. is a KNIFE Magazine Digital subscriber who followed me here from the no longer online The Truth About Knives. This review originally appeared there. J. asked that I port it over here, so we have. Enjoy.

Cudeman is a Spanish knife-making company based in Albacete, Spain. They have been in business for over 30 years in Europe and have over 40 years of service experience, but they are not that well known in North America. They produce a wide selection of good quality knives. Such as folding knives, pocket knives, hunting knives, daggers, survival and tactical knives in addition to high quality leather sheaths (their own production) and the latest Kydex sheaths. Also, they offer knife kits as well to build your own knife. They work with different kind of steels and use an assortment of natural and synthetic materials for handles. According to the company they test each and every knife in their own testing facilities using a process known as the Charpy impact test. My understanding is that they offer a lifetime warranty on their products. The subject of this review is their new (for 2016) survival knife model, the “Boina Verde Cadete” ( Green Beret Cadet).

About the steel:
This Austrian made high carbon stainless steel is an updated version of the good old and well known AISI 440C, which got an undeserved bad reputation in some circles, years ago. But this steel (with the right heat treatment) is a very good choice for stainless knife blades and also it is very popular in Europe. It has high hardness, high wear resistance and it stands up well to corrosion.

Overall impressions:
The BV Cadet and its accessories come in a nice looking cardboard box. 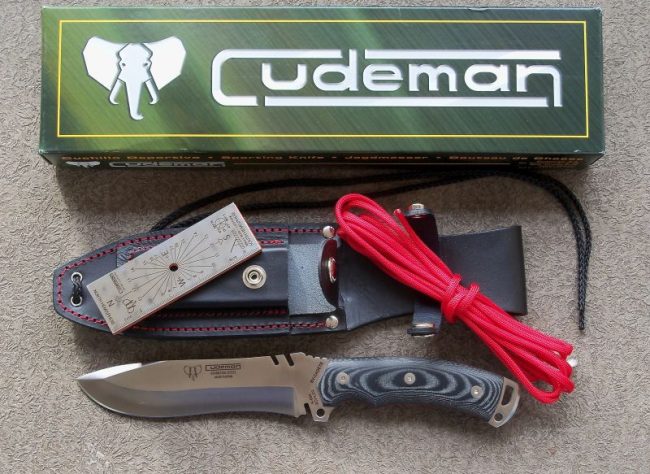 The “Boina Verde Cadete” is a robust, beefy knife with a nice heft to it. It has a full, broad tang construction with the tang extending beyond the handle panels providing a pounding surface (more on this later…). This extended tang also houses a lanyard hole and a “bullet puller”. The drop point, re-curve blade has a saber/hollow grind with a secondary bevel and a short swedge at the tip. 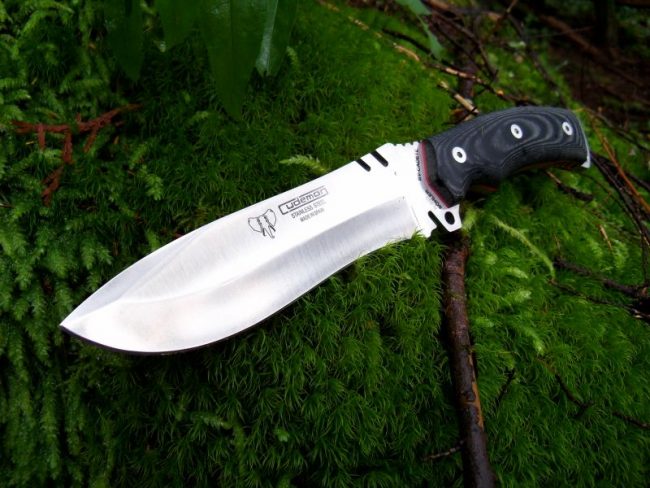 The cutting edge was sharp enough to sporadically shave arm-hair right out of the box.
There is a lot more going on with this knife… There are three wire breaker notches in slightly different sizes, a thumb rest with jimping, another slight groove with jimping for our “pinky”.
The handle of the knife consists of a well defined, integrated finger-guard with a front lanyard hole and two black and gray micarta panels with red liners. These panels are fastened with three stainless flat-head Allen screws and they are nice and flush with the surface of the slabs. The shaped micarta scales provide a secure and comfortable grip, wet or dry.
(If anything, the wet handle is even grippier than the dry…) 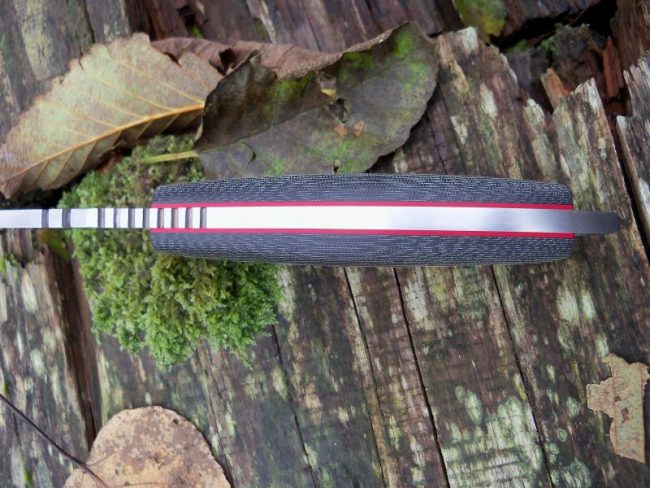 Here is a shot of the extended tang with the rear lanyard hole, bullet puller and jimping for the pinky finger. 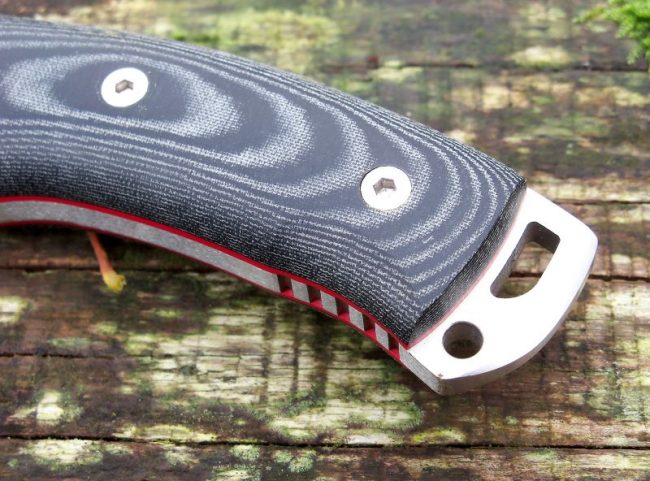 Let us see some “in hand” pictures in the most common holds. 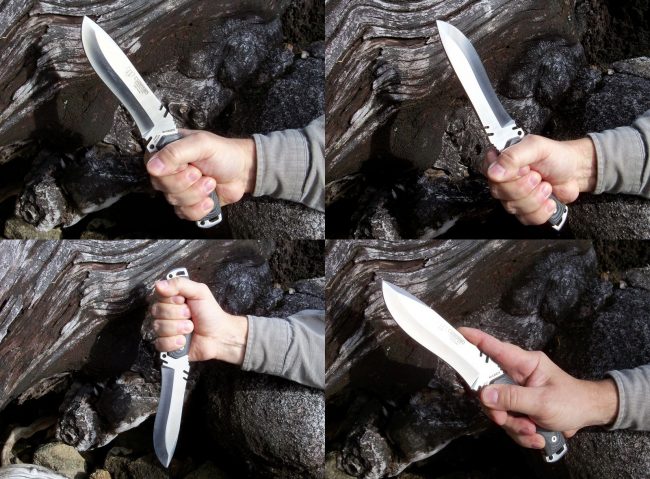 And two more with gloves, as well.

This Cudeman model comes with a high quality, black coloured premium leather sheath, which looks very good with the red stitching and chrome hardware. Also, it is even color matched with the black/gray micarta and red liners of the handle. 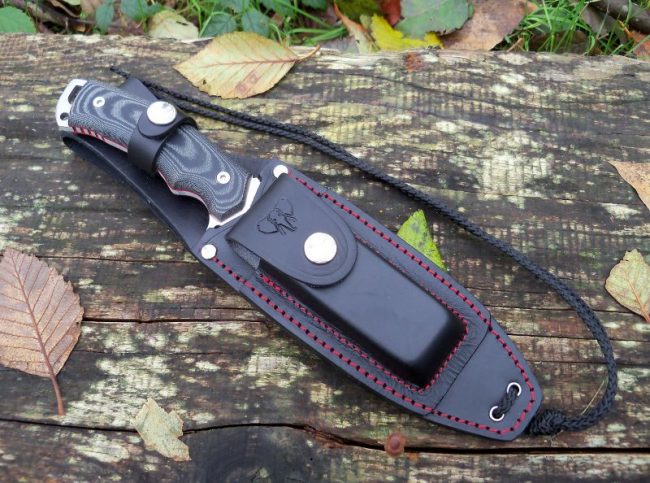 The layered or “pancake/sandwich” style sheath is fully ambidextrous and it has a very large belt loop, capable of taking very wide belts. There is a retaining strap with snap-button closure to secure the knife and there is a pocket to store the included sharpening stone/signal mirror+ as well. It is a nice, tight fit. With the retaining strap engaged, there is absolutely no play or movement of the knife in the sheath. At the bottom of the sheath there are two grommets with some factory provided cordage to be used as a leg-loop or to be able to fasten it to some equipment, if the need arises.

The fit and finish was very nice all around (including the sheath). No gaps, grind marks, uneven surfaces or anything like that.

Practical use:
I like to use a given knife (or any gear…) for a period of time before I form and share my opinion.
I have this particular knife in my possession for about three months now and I used it extensively for many different tasks and tests, out of doors and around the house. I grouped my observations and experiences in categories by field of use, rather than in a chronological order and I would like to share them here with everyone who is interested.

Cutting, slicing:
My first group of assignments is some cutting and slicing tests.
As usual in this part of my test regime, I tried to get and use as many different materials as I could get my hands on for cutting subjects in order to get a good idea about the potential and capabilities of the given knife. Let us start with some fibrous stuff, such as this braided polypropylene rope …. 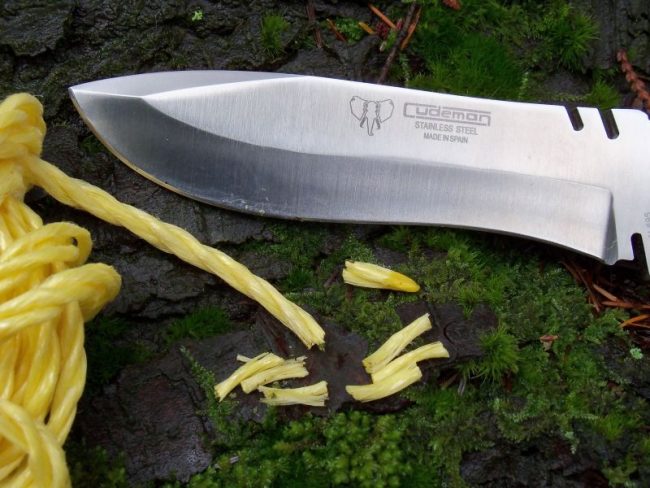 … then, a couple of the kernmantle type… 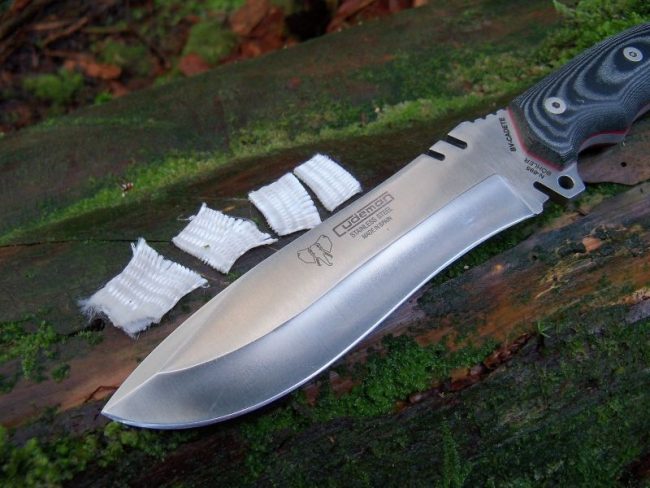 … and a section of a 55mm wide polypropylene construction safety anchor. 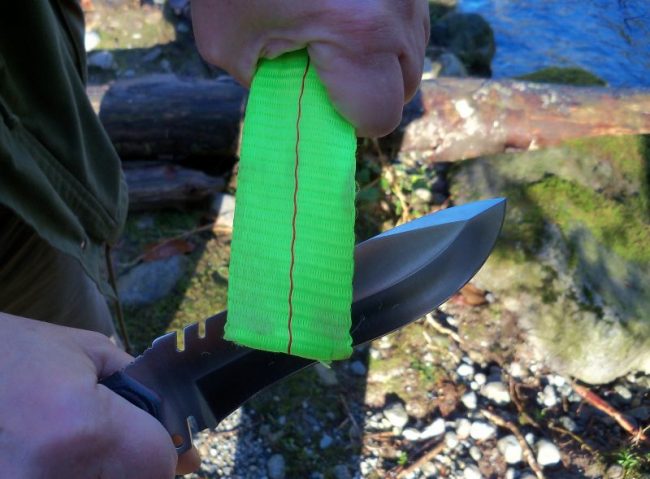 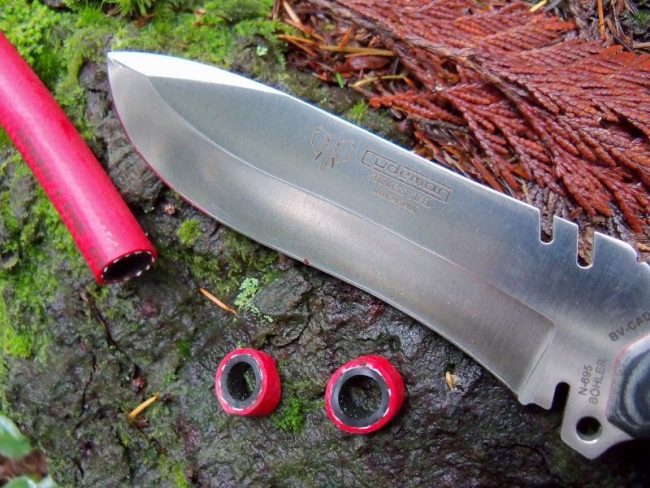 … and a piece of thick rubber tube. 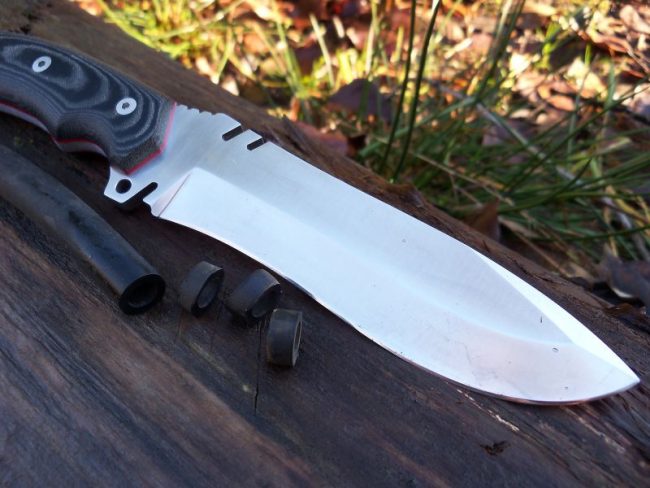 For plastic medium I have used some 8mm diameter PVC tubing. 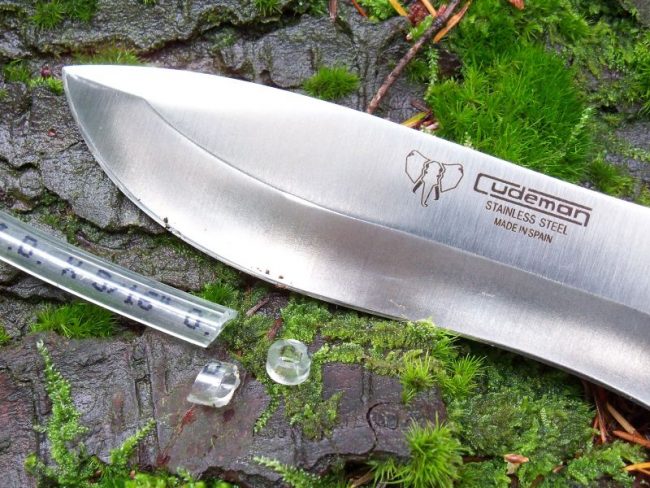 Usually I do not leave this section without some form of paper product. In this case I used a cardboard box…

… which was transformed to shreds by the BV Cadet in no time.

The knife did a good job cutting and slicing all these different materials. I had no difficulties here.

Woodwork and Field use:
In my opinion, perhaps this is the most important domain for an outdoor/survival knife, such as this blade.
With fire-making being a big part of this field I think one of the most important fire-making skills is to be able to produce nice, good feather-sticks and shavings for tinder, but this is also a good practice to get a feel of any given blade. I for one, like to do it just for the fun of it, too.
So, let us see some nice feather-sticks, which I was able to produce in different kinds of wood…

Another stage of the fire preparation is to process wood for kindling and fuel using the knife and a piece of wood as a baton. This is also an important and useful skill for instance to get to the dry inner part of the wood in a wet or moist environment and for a number of other purposes as well.
The BV Cadet splits wood well, although the hollow grind is not ideal for this task. But the thickness of the blade is a great advantage at this job. 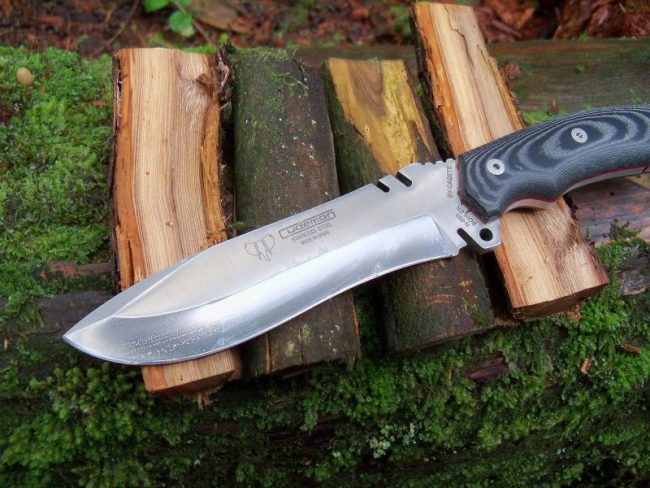 The strong, thick blade drove the halves apart with ease.

Even some knots were not able to cause problems…

Here is a nice pile of split wood ready for the fire. 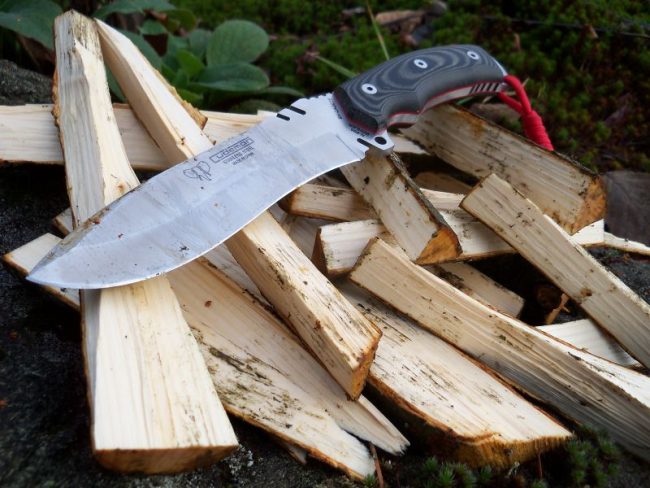 Despite its size, this knife is very capable at some basic whittling as well.
The following pictures can attest to this.
A needle like point on a stick… 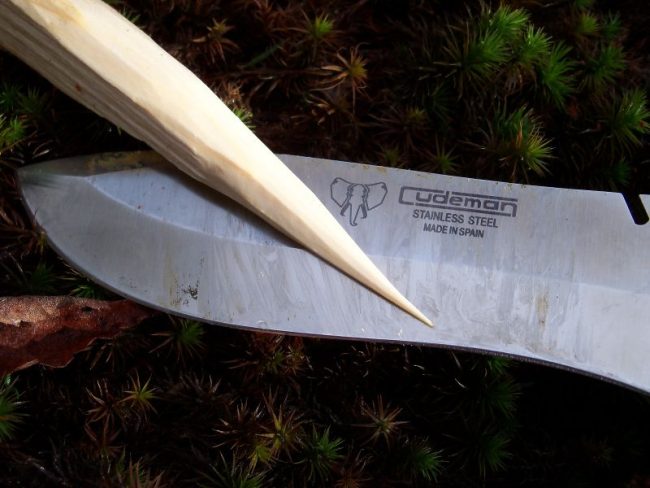 … some nicely separated, thin wood-chips on this photo…

… and the finished notch on this shot. 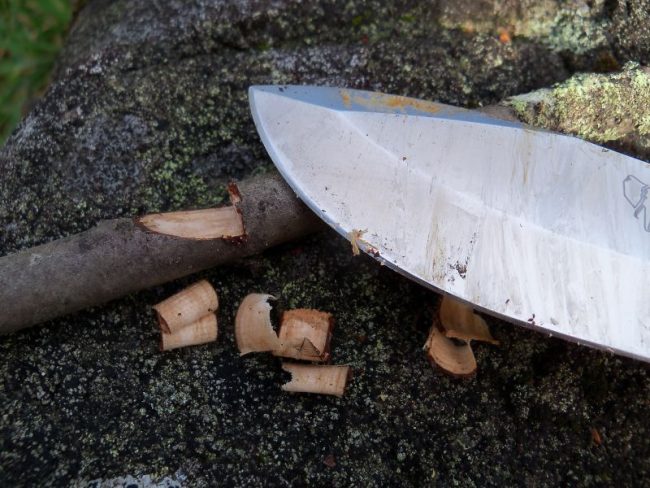 I have tested the tip of the blade by stabbing and prying in some dead and fallen logs. 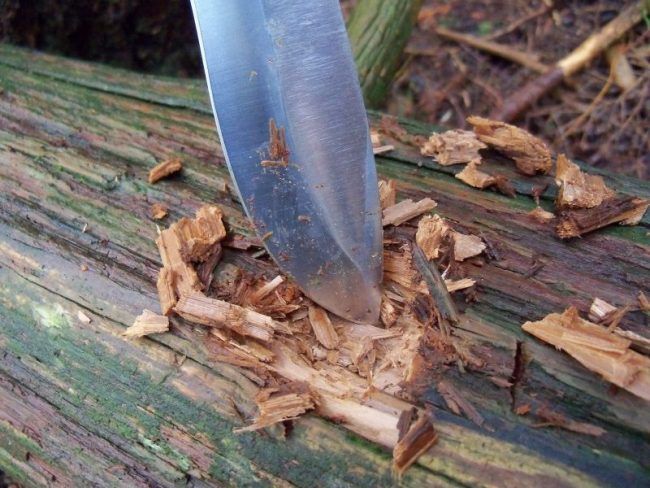 Also, I have tried some wood-drilling with the knife. Here, I found one corner of the extended tang to be overly sharp and uncomfortable. It is not a deal breaker by any means… 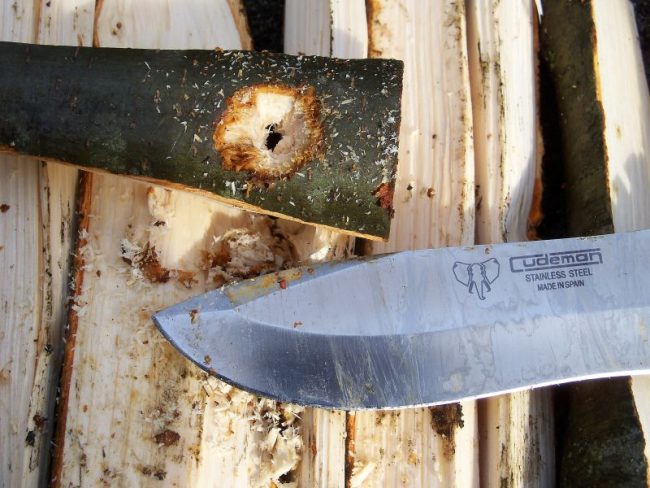 Talk about the extended tang (as I promised earlier)…
This feature not only helps to protect the handle panels from damages and is useful for pounding with, but it is also good for pounding on (strictly with a wooden baton only, no rocks or hammers, etc…). This tang can turn the knife into a chisel in a pinch, which can come handy at times. Of course the blade needs to have a robust tip for this as well, and I can report that this knife has a very strong point. I have used the Cadet (and a folding saw) to quickly construct a safe, flat working platform in a dead log, as we can see this in the following pictures.
The striking begins… 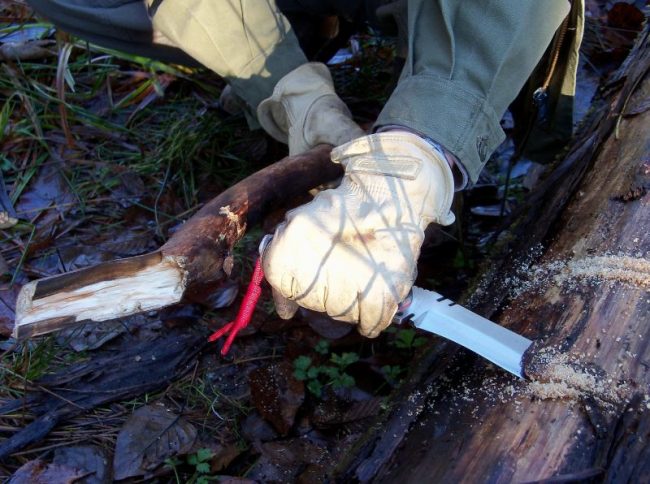 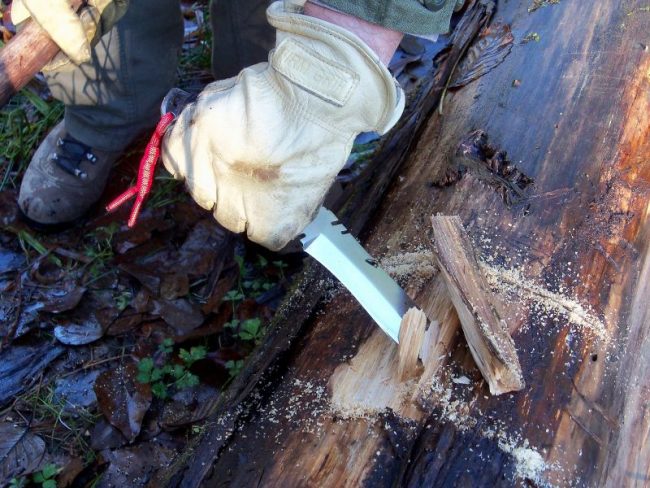 … the platform is almost done. 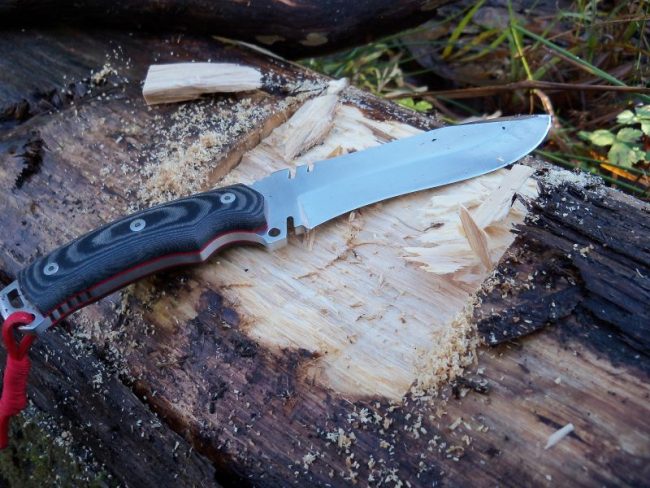 After that, I could use this new working platform to process and clean some freshly harvested fatwood. For those who are not familiar with this… fatwood is resin saturated wood and an awesome natural fire starter, which smells heavenly. 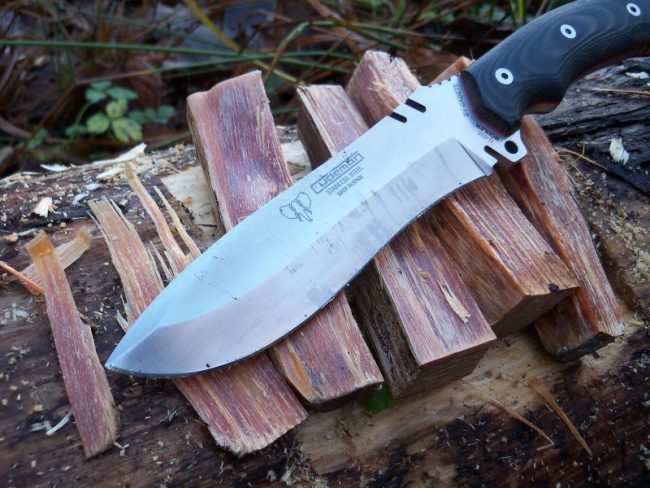 Although the spine of the blade is not purposely made for this task, it is square and “sharp” enough to be used for scraping (some fatwood scrapings in this case)… 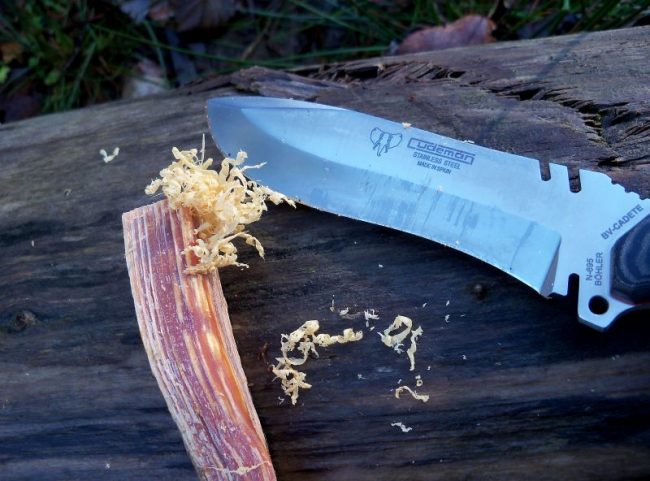 … and to work with a ferro-cerium rod. 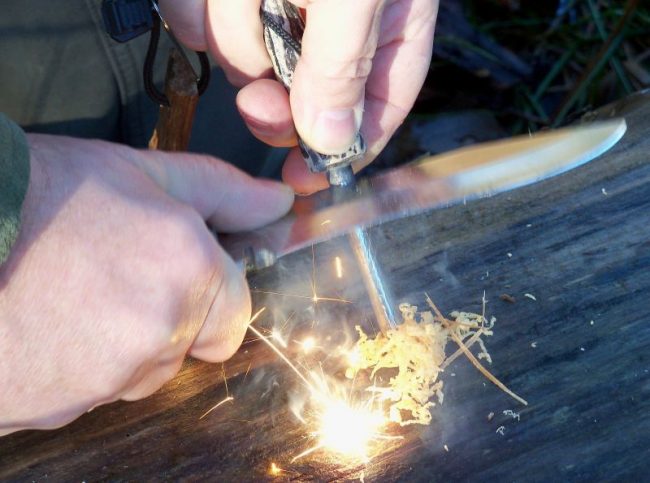 The BV Cadet worked hard and performed good in this field.

Food preparation:
Now, I have to say this area of use is not the strong suite of the knife, but the stainless steel blade and synthetic handle is a definite advantage here. The hollow grind somewhat compensates for the thick blade, but the knife still splits, rather than slice harder food items, like carrots… 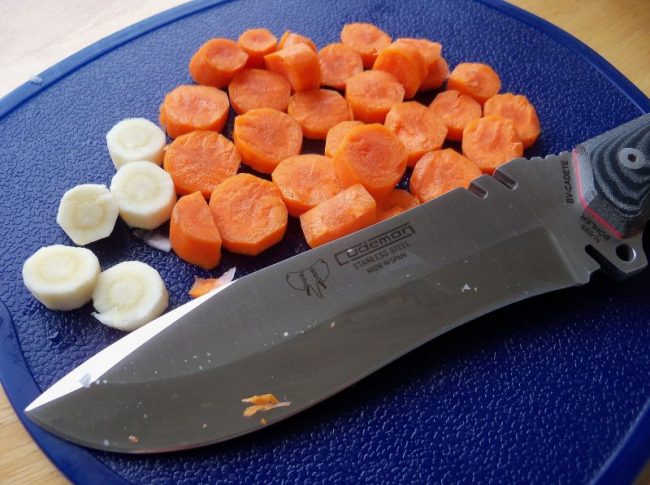 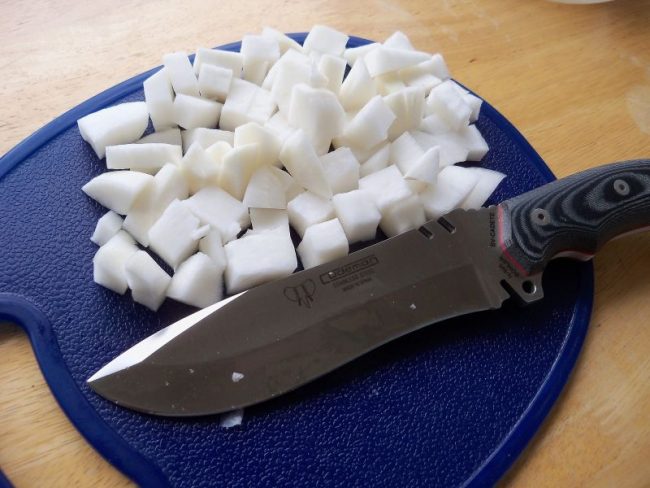 Of course this is a lot less noticeable in softer food items, such as fresh pineapple… 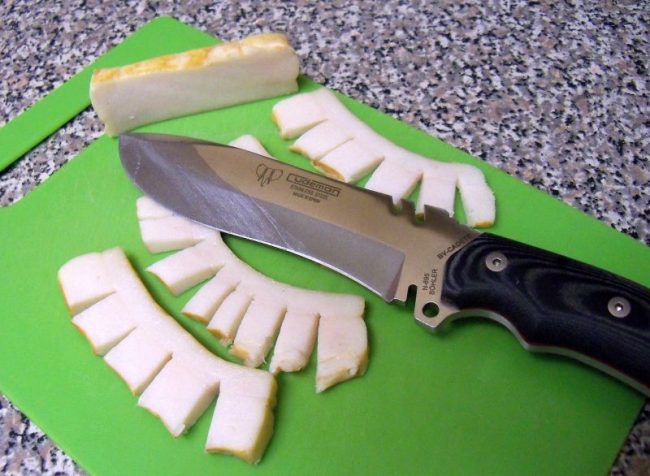 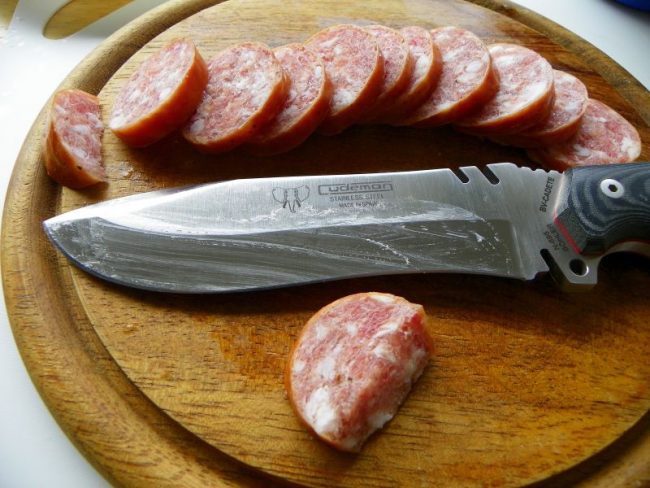 Still, the Cadet did a decent job in the kitchen and would make a useful camp-knife.

Final thoughts:
This Cudeman model is more of a survival blade than a bushcraft knife. It is capable of handling heavy duty tasks and finer, more detailed work as well. This blade is adequate for some light chopping, but it lacks the proper length and weight to be used efficiently for that duty. During the past three months (or so…) this tough knife suffered no damages of any kind, except some light surface scratches on the blade, which is normal wear and tear. It stood up for hard use and took some abuse, no problem. I am pleased with the general performance of the knife. Edge retention was good, I hardly had to use my leather strop or my Sharpmaker rods. The Bohler N695 stainless steel stood up well against food juices and acids, snow and rain, showed no signs of rust or stains at all. But even so, keeping the blade dry and clean, goes a long way in knife maintenance.
The handle is comfortable, but I have noticed some hot spots there during my usage. One was at the corner of the extended tang (during my wood drilling test), which is normally not a problem, because it is not in contact with the user’s hand. The other area is on the inside edges of the integrated finger-guard. Both of those edges feel too sharp and uncomfortable during hard use, where one bears down heavy on the blade. It is not so bad with the use of gloves. But all that these two areas really need is some extra rounding and smoothing.
The wire breakers and the bullet puller is not much use for me personally, but I can see some tactical applications for those features. They might come handy for some people and there is no harm having them on the knife (the blade is still plenty strong).
I like and find the sheath attractive and the sharpening stone/signal mirror+ combo is a useful accessory in my opinion.
All in all, this is a nice package and I think this Cudeman model would serve anybody well as an all around, main survival/outdoor knife.

Thanks for reading!
Switchblade,