(Editor’s note: This post originally appeared at The Truth About Knives. Used with permission of author)

The $80 Spyderco Native FRN is a bit of a sidestep from Spyderco’s design language. Don’t worry: it’s still superbly sharp and still has the Spidey-hole that makes a Spyderco a Spyderco. But it’s neither a tactical blade or a hard-use utility knife, and it doesn’t share the odd grip styles and postmodern blade geometry of most other Spydercos.

It’s also got one of the most affordable S30V blades on the market, and some people might buy it just for that. Will they be delighted or disappointed with the Native FRN? It depends what they were looking for.

First a bit of clarification: this is a review of the Sypderco Native FRN, and I’ll refer to it as such because there’s another Spyderco, the Native 5, and I don’t want to confuse the two. The Native 5 has the same name and basic design, but it has some crucial difference which make it a very different knife. The Native 5 is also considerably more expensive than the Native FRN, which is not terribly cheap to begin with. 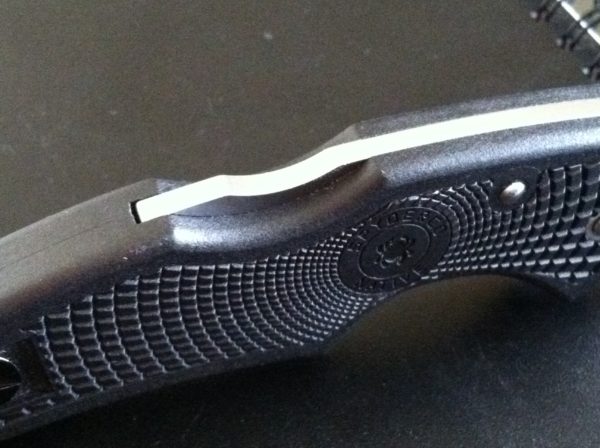 The Native FRN is a lockback folding knife with molded FRN grips, no liners, and a reversible tip-up pocket clip. The S30V spear-point blade is 1/8″ thick and 3.125″ long, with a 2.625″ cutting edge and a fairly deep hollow grind. It’s available in plain-edged and combination-edge models.When folded it measures a pocket-friendly 4 inches long and 7/16″ thick; it’s 9/16″ thick including the clip. It measures 7″ long when opened, and weighs 2.65 ounces including the clip.

I’ve had one in my left-side pocket for several weeks, and there are many things I really like about it. There are a few features I’m not so nuts about, and I won’t be shy about calling them out. 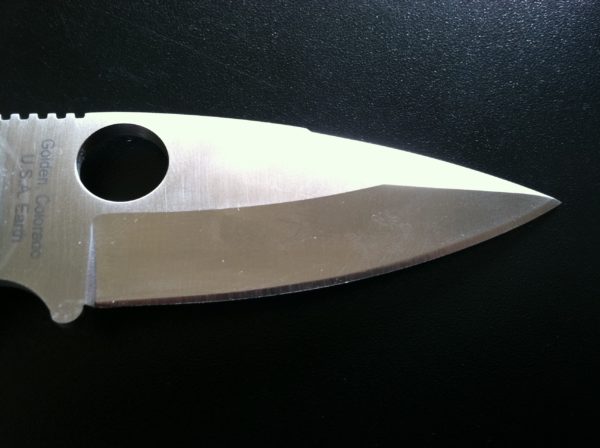 The Native FRN has a lovely spear-point blade made from premium S30V steel. The deep hollow grind is a bit unusual for a Spyerco, whose full flat ground blades are famous for taking a wicked edge. It may not have the same cutting performance as an FFG Spidey, but never fear: it’s still bloody sharp.

The first inch or so of the blade has a false reverse edge. Knife makers usually advertise that these swedges are designed to ‘save weight’ but I don’t buy that because the two tiny splinters of steel that are removed would only weigh a few grams. Whatever their purpose (I think it’s for better penetrating ability) the reverse edge is just flattened enough to not be considered a ‘dirk or dagger’ in states which don’t let you rock double-edged blades on the street.

The tip, however, is still needle-sharp. It’s got a decent bit of drop for good control, which makes it great for cutting delicate shapes from construction paper.  It’s also amazingly good at digging out splinters, but it may be vulnerable to snapping off if you try something careless with it.

The entire edge is hair-popping and newsprint-shaving sharp right from the factory. It’s not as sharp as a factory Mora (although it’s close) but it’s right up there with the sharpest factory grinds I’ve encountered. It proved to be sharp enough that I wasn’t confident in my ability to fully re-sharpen it after testing. I still haven’t mastered my Japanese water stones, and I’m waiting for my small ‘nagura’ slurry stone to arrive from Japan but that’s a story for another day. 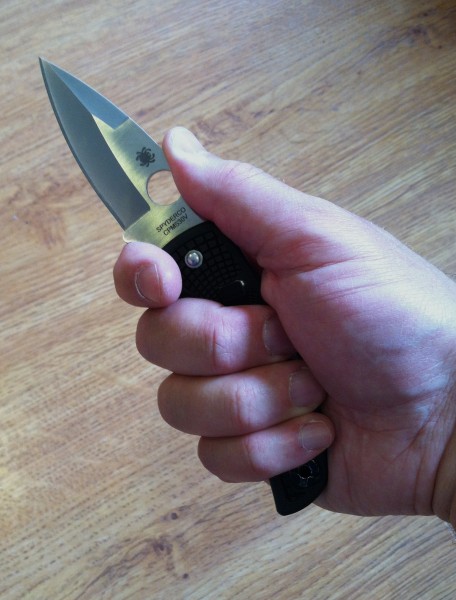 The Native FRN is a fairly small knife with fairly small grips. The blade has a forward finger choil which forces your hand into choking up on the blade as shown here. The grips have a second choil for your middle finger. The indentation in the pocket clip is perfectly shaped and located to conform to the ball of your middle finger, and the spine of the blade has some aggressive jimping.

All of this adds up to deliver an extremely secure and comfortable grip on the knife, as long as you don’t put it to heavy use. If you have to really bear down on the blade, the index-finger choil and the sharp jimping get uncomfortable in a hurry. The small FRN grips have neither the leverage nor the strength to perform well for long. This is an EDC knife, and not a heavy-use utility blade.

I did like that the ‘David Boye Dent’ on the locking lever (see the ‘construction’ photo) prevented the knife from closing on my hand no matter how hard I crushed it. 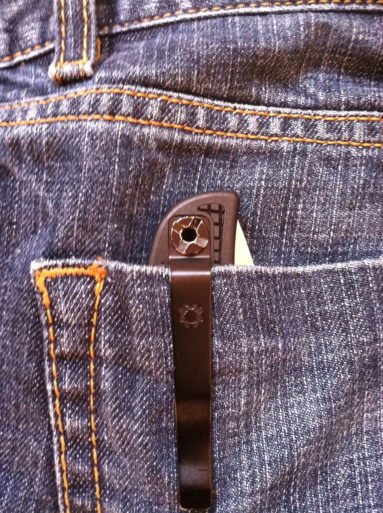 The tip-up pocket clip does its job: it holds the knife securely and lets you draw it without undue effort. But it’s not a deep-carry clip, and with nearly 1/2″ of grip and blade sticking from your pocket it’s hardly the definition of ‘discreet carry.’ When I clipped the Native FRN in my left back pocket, the sharp jimping also had a tendency to saw into my wallet.

Both of these problems vanished when I ditched the pocket clip (always keep your original knife packaging) and carried it loose in my pocket. It’s light and thin and soft-edged except for the jimping, and it simply vanishes in your pocket. 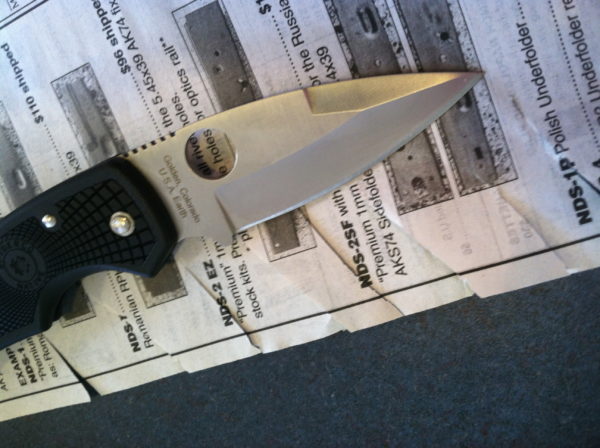 After shredding some Shotgun News-print, I turned my aggression toward my stockpile of box cardboard to see how well the Native FRN’s blade stood up to hard, abrasive use. I cut through 65 linear feet of cardboard with basically no sign of tearing or crushing the cardboard. This is very impressive edge retention, but it taught me many other things I wasn’t so impressed with.

Issue #1: During hard use, the Native FRN’s grip gets tiring very quickly. This is common to many smaller knives, whose grips just aren’t hand-filling enough to stay comfortable for long and heavy cutting.

Issue #2: I was unimpressed with the cutting efficiency of the deep hollow-ground blade. Cardboard cutting required more effort than it should have, even though the blade itself remained exceptionally sharp throughout the test. This knife marks my first test knife with an S30V blade, and I’m extremely impressed with its edge-retention abilities.

The cardboard basically wore me out before it wore down the edge of the Native FRN.

After calling it quits on the cardboard test (my hands were cramping and my right thumb was very sore from the jimping) I returned to the pages of Shotgun News to see how the edge had degraded. To my surprise, it still had some ability to neatly slice the crepe-paper newsprint without tearing or crushing, although it required a careful draw stroke.

Grade: A for edge durability, B- for cutting efficiency.

If you need to cut tough materials like rope, the plain-edge Native FRN is the wrong knife for the job. It’s got a small blade, a plain (not serrated) edge and small grips, and all of these qualities suck for heavy cutting jobs.

The Native FRN was the second-worst rope cutter I’ve tested thus far for TTAK. Only the CRKT Tuition had more trouble cutting through 3\4″ manila, and the Tuition costs less than half of what the Native FRN will set you back. The Native FRN’s blade geometry is all wrong for heavy cutting, and the FRN grips lack the rigidity to power the blade through the toughest targets.

The test knife had absolutely zero blade wobble until I arduously forced it through several sections of 3/4″ rope, but the trauma of this experience caused a small but noticeable wobble afterwards. As a final insult, the Native FRN’s blade pivot is secured by a non-adjustable rivet instead of an Allen or Torx screw. This makes is very difficult (or impossible) to tighten the blade if a wobble develops. The blade forums advise you to use a ball-peen hammer to gently tighten the rivet if this happens, but I tried to do this and it’s not as easy as it sounds.

Note that I only tested the plain edge version of this knife, and a fully-serrated version is also available. Spyderco calls it a ‘combo edge’ but it only has a fraction of an inch of plain edge near the tip. There’s just not enough blade on this knife to provide very useful lengths of plain and serrated edges. A serrated edge would definitely have boosted the rope-cutting performance, but fully-serrated knives don’t have the overall utility that plain-edged knives do.

The Native FRN came so sharp, as I mentioned, that I was unsure of my ability to completely re-sharpen it. I shouldn’t have worried. Even after the cardboard test, a dozen strokes per side on the ceramic sticks and a few stropping strokes were all it took to restore the edge to its hair-popping glory.

The Native FRN is too small to be a ‘tactical’ knife and not heavily constructed for difficult cutting tasks. But it makes a really good EDC knife for light or casual use, and it carries even better if you remove the pocket clip and just slip it in your pocket.

S30V looks like a great steel, and I suspect that the newer ‘Native 5’ addresses most of the issues that I have with the Native FRN. The Native 5 has an FFG blade, made of super-exotic S35V (yowza!) and G10 grips with skeletonized liners.  It should prove to be a more efficient cutter than the Native FRN, and much more durable as well. It’s also nearly twice the price.

Ratings (out of five stars)

Styling: * * * *
Still snazzy, but more subdued in appearance than most Spydercos.

Blade: * * * *
I’m impressed with the properties of S30V steel, but Spyderco’s traditional FFG grind might have been a better choice.

Ergonomics: * * * *
Smaller knives are at an ergonomic disadvantage when it comes to heavy cutting jobs, but the Native FRN is perfectly proportioned and shaped for light tasks and it disappears in your pocket. Subtract a star for the overly-sharp jimping and the high-profile pocket clip.

Ruggedness/Durability * * 1/2
The unlined FRN grips developed blade wobble a lot sooner than I would have expected, and the pivot rivet isn’t easy to tighten.

Overall Rating: * * * 1/2
A mid-grade pocketknife with a super-steel blade and a handful of issues that prevent it from being really great. If you like the Native FRN, you’ll love the Native 5. 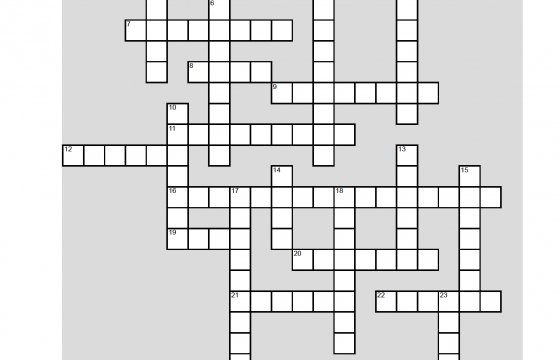 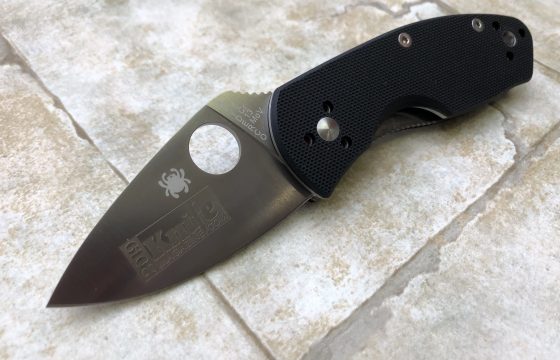